< Back to Leadership Staff 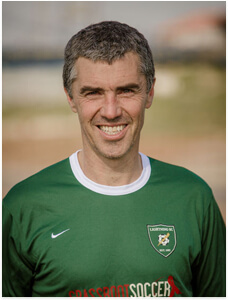 Tommy Clark is a pediatrician and former professional soccer player. Tommy conceived the idea for Grassroot Soccer after living and playing soccer in Zimbabwe. Tommy was born in Scotland and moved to Zimbabwe at age fourteen where his father Bobby Clark was coach of the Highlanders Football Club. He attended Dartmouth College where he was captain of the soccer team. Following graduation, Tommy returned to Zimbabwe to teach English and play professional soccer. Tommy attended Dartmouth Medical School and completed residency in pediatrics at the University of New Mexico where he was twice named the Resident Teacher of the Year. Following residency, Tommy was a research fellow at the Center for AIDS Prevention Studies at the University of California at San Francisco. Tommy has been awarded the American Academy of Pediatrics Annie Dyson Child Advocacy Award, the Dartmouth College Martin Luther King Junior award, the International Association of Physicians in AIDS Care Nkosi Johnson Award, the Peace Abbey Courage of Conscience Award, and was named to the Alpha Omega Alpha national medical society.

A Letter from Tommy Clark

From an early age, I have been immersed in the world of international soccer. While I was growing up, my father travelled around the world as a player on the Scottish national team and brought me home gifts from his travels – a lasso from Argentina, a wooden lion from China – all tokens and reminders of soccer’s reach and appeal around the world. When I was 14, I had a chance to experience soccer’s global influence first-hand: my family moved to Zimbabwe where my father coached accepted a coaching position for Highlanders FC, a Zimbabwean professional soccer team.

Living in Zimbabwe was the most formative experience of my life. Despite the many differences between my family’s upbringing and the local Matabele culture, we always felt welcomed thanks to our shared love of soccer. I have many fond memories playing soccer and wandering the dusty townships of Zimbabwe with my friends and teammates. These were wonderful, care-free years; HIV had yet to unleash the full power of its devastation.

With increasing political instability in Zimbabwe, my family moved to the US where, and my father was appointed head coach of the men’s varsity soccer team at Dartmouth College. During his tenure at Dartmouth, I had the opportunity to attend Dartmouth and play for my dad before returning to Africa to play soccer and teach English post graduation. Back in Zimbabwe, I worked with local school children teaching English and coaching soccer while I played on the Highlanders professional soccer team, the same team that my father had coached almost a decade earlier. Every day as I walked to practice, I was followed by a group of children who would abandon their own pick-up soccer games to join me on my walk. The bolder children would push to the front and walk next to me, practicing their English as I practiced my isiNdebele. Over time the group of children grew as word spread that a Mukiwa (white man) and professional soccer player was in their community. It was on these walks that I further realized the power and draw of soccer. 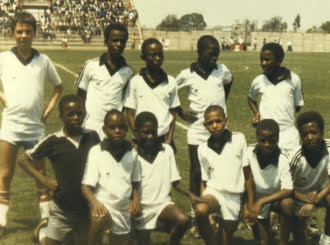 Playing with the Highlanders FC junior team in Zimbabwe at age 14.

Zimbabwe, however, had changed since I first arrived as a teenager. City squares that had teemed with artisans selling crafts and vendors selling food and staples were now empty. European tourists who had roamed the graceful streets of Bulawayo were conspicuously absent. Families were missing uncles, mothers, sisters, and grandparents.

I attended several funerals with team members and paid respects to families who had lost loved ones from this mysterious and unnamed illness. In retrospect, I realized that I never had a single conversation about HIV the entire time I was there. We were all subject to the prevailing culture of silence and denial. Even while people were struck down in scores all around, communities remained mute.

I left Zimbabwe a year later to return to Dartmouth and attend medical school. Over the next four years I received reports that more and more of my Zimbabwean friends had died. Deep down, I couldn’t shake the feeling that soccer could somehow help break through the deafening silence surrounding HIV. If Michael Jordan could promote consumer products, why couldn’t soccer stars promote health? A chance meeting with Dr. Albert Bandura, a Stanford sociologist famous for articulating the Social Learning Theory of how role models can affect behavior change, gave me confidence that I was on the right track.

During the intern year of my pediatrics residency training at the University of New Mexico, my ideas began to crystallize. During a month-long elective rotation focused on community advocacy, I developed a proposal to use Zimbabwean African professional soccer players as HIV educators in their communities. I was so inspired by the idea that when the rotation ended, I decided to continue my work. I joined forces with a few friends who also had lived and played soccer professionally in Zimbabwe: Methembe Ndlovu, a Zimbabwean whose soccer skills earned him captaincy of his country’s national team and who also played soccer at Dartmouth College, Kirk Friedrich, a soccer teammate who I first met in New Mexico while preparing for medical school, and Ethan Zohn, who in addition to playing with the Highlanders, was also a recent winner of CBS’ Survivor Africa. Together we formed Grassroot Soccer.

In late 2002, we traveled to Bulawayo. We met with community leaders, headmasters, and focus groups of children and teachers and planned a pilot project that was launched in January, 2003. We worked with a consultant to develop a culturally appropriate soccer-based curriculum, then recruited and trained 14 professional male and female soccer players as HIV educators. Grassroot Soccer was born. 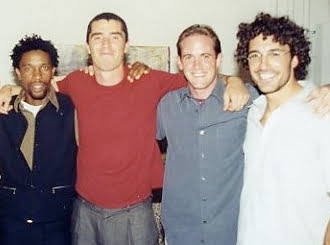 Me and my GRS Co-Founders at our first official fundraising event, 2002. From left: Methembe Ndlovu, me, Kirk Friedrich, Ethan Zohn 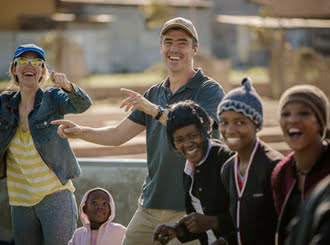 The energy of our programs is always high.
Khayelitsha, South Africa, June 2014

Since our formation, Grassroot Soccer has expanded to over 50 countries through our flagship sites and partnerships. We continue to mobilize the global soccer community through a variety of soccer-based health education programs to stop the spread of HIV and tackle other acute adolescent health issues in high-need areas around the world. For me, Grassroot Soccer has been the culmination of my life’s experiences and life’s work: growing up in a professional soccer family and playing professionally myself, my experiences in Zimbabwe, and now as a pediatrician dedicated to improving the health of children around the globe.