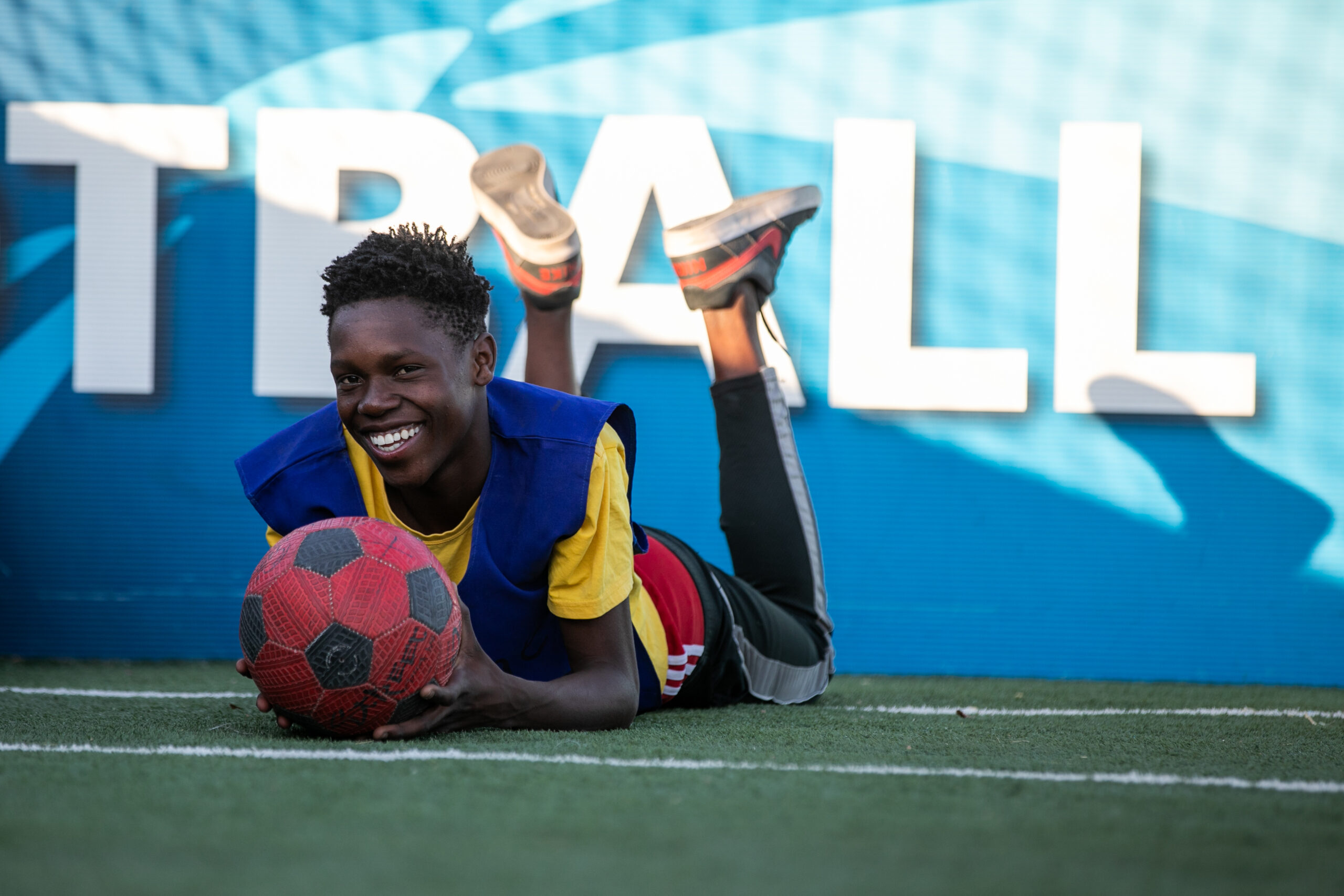 Scoring Goals: in Soccer and in Life

“My family was so happy when they realized that the lessons I had learned at GRS had brought more impact in my life.”

In honor of Grassroot Soccer’s 20th anniversary, we are spotlighting former participants from over the past two decades, where they are now, and how participating in GRS programs helped them get to where they are in life today.

Grassroot Soccer (GRS) helps young people identify and work toward their goals in life, whether it’s to graduate from school and go on to university, start a business to support their family, or even achieve their dream of becoming a professional footballer. Mthokozisi Msebe is one such individual.

A former GRS SKILLZ participant and Coach who is now a professional footballer playing for Bulawayo Chiefs in the Zimbabwe Premier Soccer League, Mthokozisi caught up with GRS’s Praise Dlakama recently. In their conversation, Mthokozisi opened up on how the life skills he developed through GRS programs helped him to emerge from a community where drug and substance abuse is rife to achieve his goal of becoming a professional footballer.

GRS: Tell us a little about yourself and how you’ve been involved with GRS.

Mthokozisi: My name is Mthokozisi Msebe and I am 22 years old. I started as a GRS participant in 2011 when I was in grade six and continued through my secondary education. I am a graduate in the SKILLZ Core, SKILLZ Boy, and Generation SKILLZ curricula. I am also a former SKILLZ Coach; from 2018 to 2021, I facilitated the SKILLZ Boy and SKILLZ Core curricula with youth in my community.

[SKILLZ Core is a mixed-gender intervention for very young adolescents aged 9-14 that focuses on social asset building and introduces core sexual and reproductive health topics during puberty, a time of profound change for young people. SKILLZ Boy, also known as SKILLZ Guyz, is a soccer-based  program  for  adolescent  boys  aged  12-18  that facilitates  discussions  on  masculinity,  gender  equality,  sexual  health,  violence,  and  substance  use.]

What are you doing now?

Currently, I am a professional footballer playing for Bulawayo Chiefs in the Zimbabwe Premier Soccer League, which is the highest league in the country.

Did GRS influence your behavior? Do you have any specific stories?

GRS made a big impact in my life. As a child, I believed that knowing about my HIV status was something less important. However, after doing the ‘Know Your Status’ activity with GRS, I realized the significance of getting tested. It is important to know whether you are positive or negative so that you make informed decisions about your life and plan for your future.

I went for HIV testing while I was still a GRS participant, and now I know that I have to go and test for HIV every three months. I also know that I should have one mutually faithful sexual partner. I know that I should wear a condom, correctly and consistently, or abstain from sex if I feel I am not ready to handle the consequences that come with being sexually active. GRS taught me that sex is a big choice.

What was your favorite SKILLZ activity you did as part of GRS?

My favorite game was ‘Go for Goals.’ It taught me that in life you will definitely face some challenges, but you have to stay strong and overcome those challenges to achieve your goals. For example, drugs have cost a number of youngsters in my community their careers. Be it pursuing education or football, they give up on their goals because of challenges with drugs and alcohol. They should not give up but go forward and tackle the challenges head on.

Related to this was another activity called ‘Game Changer.’ This activity taught me that you can be a game-changer by teaching young people in your community about the dangers of abusing drugs. You can stay away from drugs so that you lead by example. That way people can listen to you. That is what I did in my community.

The other games I remember include ‘Cut and Cover,’ which influenced me to access voluntary medical male circumcision (VMMC), and ‘Gender and Power,’ which talks about gender expectations and the importance of gender equality. [VMMC is an important strategy for preventing HIV infection.]

What do you remember about your GRS Coaches?

My Coaches were very friendly. With one Coach, Witness, we came from the same community and spent a lot of time together. He liked talking to young people and giving them advice on how they can become game-changers in the community too. He was our role model. My other Coaches, Ngodzo and Amelia, were former footballers and we were inspired by them a lot. Amelia made it easy for us to understand her. She ensured that we understood the topics she taught us.

How did your Coaches make you feel?

Having a SKILLZ Coach made me feel like I mattered. Coach Ngodzo was someone we heard about in the newspapers and on the radio. He inspired us a lot, so when he came through to teach us about sexual and reproductive health issues and life skills, we listened to him.

On days when we had GRS sessions we were always excited. The Coaches made us happy. After the sessions, we always talked about our Coaches because they taught us about a lot of things, like those parties in which young people usually drink and take drugs. The Coaches taught us that when you are drunk, your judgment will be impaired and anything can happen. You can have unprotected sex and contract a sexually transmitted infection (STI).

Do you still interact with any of your Coaches after graduation?

We do interact a lot still. If I need any information regarding sexual and reproductive health, I can always go and ask Witness. It’s easy to open up to him because we come from the same community and since I was young, he has been that person I have relied on.

What did you tell your family members about GRS? How did they respond?

At home I taught my family about gender and power and gender equality. I would wash plates when my sisters had homework or were busy. I would help whenever they needed me to help, and I made sure that we all had equal roles and responsibilities. My family was so happy when they realized that the lessons I had learned at GRS had brought an impact in my life.

I also told them about GRS and how we were not learning about playing soccer but about life skills and the challenges that young people go through and how to overcome those challenges. GRS uses soccer to teach these things because of its popularity.

And not only did I tell my family about GRS, but I told my friends as well. Most of them abused drugs, and whenever I learned something I would go and teach them. They listened to me because I led by example. I was a role model to them.

What would you like to say to GRS as they celebrate 20 years?

I would like to thank GRS for everything that they taught me. It really brought a lot of impact in my life.