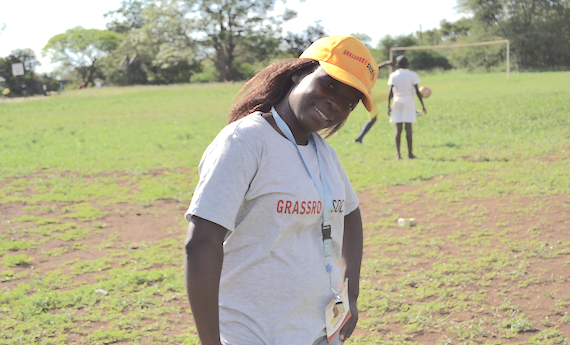 Editor’s Note: Anita Ndlovu is a Grassroot Soccer Caring Coach in Bulawayo, Zimbabwe. She currently facilitates SKILLZ Street activities, focusing on providing adolescent girls with health education and mentorship. Here she tells her own story in her own words (edited for length):

I once lived in a happy home, with a happy family, whose remarkable moments came to an end when my mother passed away…[L]ater, my father brought into our home another woman, who was introduced to me as my mother. My lifestyle changed a lot as my stepmother mistreated me, reported lies about my behaviour to my father and exaggerated the turn of events each time we would have a misunderstanding. Basically my stepmother used this as a means to turn my father against me. I would suffer mostly when my father was not around as I would do a lot of work and would go to bed on an empty stomach.

As time went on I got used to the mistreatment that my stepmother would subject me to. I would not be able to tell my father because I feared he would choose my stepmother’s words over mine. I later met a guy named Peter (editor’s note: not real name); we had been dating for about five months and we decided to sleep together.

Peter was always there for me and he had promised me good things. He had also promised to marry me. Two months later I realized I had been missing my monthly period, fearing that I might be pregnant I then kept it to myself. The burden of keeping such a secret overwhelmed me and I decided to tell Peter about my pregnancy.  He had no room to deny the pregnancy so he told me he would make the necessary arrangements for how he would take care of the baby.

I could not hide the pregnancy any further because over time it began to show as my stomach started growing. My father…confronted me about it and chased me away. I did not have anywhere to go to so I decided to go to Peter’s house. When I got [there] I found out [his family was] no longer living there, his father had been had been transferred…because of his job. I then contacted Peter’s parents and told them about the pregnancy…Peter denied everything and his parents believed him. I decided to let it go.

On that day I was chased from home, I slept under a bridge, I had no food, no water, no blanket to keep me warm and just as I was counting my fate it started raining heavily. The following day I decided to go and pay my uncle a visit. When I arrived he immediately noticed that I was pregnant.  He listened to my story and he took me in. My uncle treated well for a while, but in a short while he turned and began treating me bad. He began sending me to town and bus ranks to sell drinks and super cools. I would spend the whole day at the bus ranks without eating anything at all. Life became very difficult for me and I began thinking about taking my life.

One day my aunt called me and told me to go and live with her daughter. I then went there to live with my cousin and everything was good. My cousin then visited her in-laws and I remained with her husband. He then tried to rape me but did not manage. This went on for a while and all the time my sister was away he would try to rape me but he would not succeed. I kept all this to myself because I had no one to talk to. I was afraid of telling my cousin because I feared that she would chase me out of her house. I later delivered a baby girl.

[T]wo months [after] of giving birth I began looking for a job. I got a job as a housemaid and I would leave my daughter with my cousin.

Life as a house maid was not easy at all I would work long hours, sleep late, get shouted at all the time and I would have a lot of work to do. …I had to support my daughter. I worked hard day and night so I could take care of this new life. 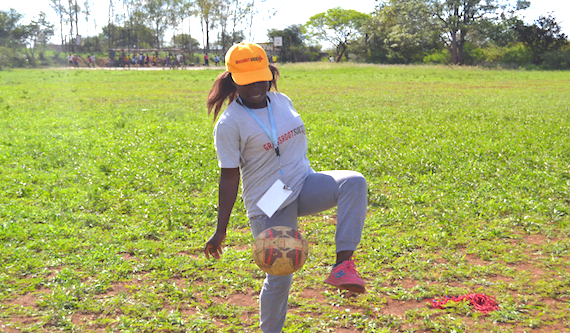 I worked for three years at that very place then I met another man named Lazarus….We fell in love and I deeply loved him. This time I became more wise and careful with this relationship. I did not want to involve myself in any sexual acts. As we continued dating he then requested for my hand in marriage and I agreed.

I am happily married and my husband has been very good to me. My husband treats me with respect and also treats my daughter as his very own. My husband…sent me back to school to finish my O Levels and I wrote them and passed with flying colours. I joined Grassroot Soccer Zimabwe and became a coach.

During the coaches’ training I learnt a lot about resilience in life and I began to apply it. I realized the importance of bouncing back no matter how difficult the situation can be in one’s life, one can always lead a happy and healthy life. My aim as a SKILLZ facilitator is to mentor other young women to be confident and empowered to live risk-free lives.

Amplifying the Effort to End Malaria Through Partnerships