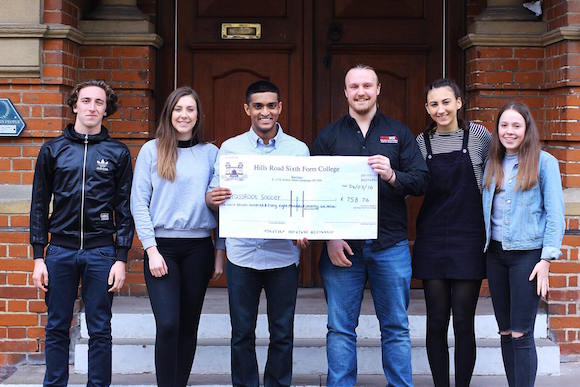 March 18th 2016 marked the conclusion of a three month 5-a-side football tournament that is a highlight in the sporting calendar for Hills Road Sixth Form College, Cambridge, UK. The Copa Del Hills is an annual tournament that truly captures grassroot British football at its finest: skill, heart and banter! The spectating crowd, armed with drums, confetti cannons, airhorns and, of course, vuvuzelas, transformed a modest local sport centre into a pantheon of football. Over three months the initial field of 32 teams was whittled down and only two remained: 50 Shades of O’Shea – the tournament favourites, and the four-man team of Copa Goal or Two. After a back-and-forth affair and against-all-odds, Copa Goal or Two upset 50 Shades of O’Shea to join an elite group of teams worthy enough to call themselves ‘Copa Del Hills Champions’. All the drama from the final can be viewed on the Copa Cam YouTube channel, including a final whistle pitch invasion that is as much of a British grassroot football tradition as the match day consumption of a pint and pie (15:00 mark).

The Copa Del Hills has been the first student-run tournament within the United Kingdom to partner with Grassroot Soccer, and we are grateful to the members of the Copa Committee whose efforts led to  £759 in fundraising from Hills Road Sixth Form College.

Vineeth Joseph talks about his experience in organising the Copa Del Hills and the partnership with Grassroot Soccer:

“Copa del Hills started off as fun and friendly way to increase participation of students in sport in a fun and relaxed environment and over the years has grown in popularity and size. ..[S]ince beginning the partnership with GRS, we’ve seen an increase in the number of people coming to support the tournament. Organising the tournament is a challenge as it requires a lot of time to plan and coordinate and everyone involved in organising have to find ways to balance this with other academic and college responsibilities and work. However, it was especially pleasing to be able to raise such an amount of money for GRS and the wonderful work they do in educating young adolescents about the risks of HIV/AIDS and other health issues.”

Congratulations to everyone at Hills Road Sixth Form College associated with the fundraising effort and welcome to the Grassroot Soccer community!

Being the Change: Meet Coach Nomazizi