Boston, MA (May 1, 2015) – Grassroot Soccer, an international nonprofit that uses the power of soccer to educate, inspire, and empower youth to stop the spread of HIV and live healthier lives, and PUGG, makers of innovative, durable and portable soccer goals, today announced a new partnership, with PUGG becoming the Official Goal of Grassroot Soccer 3v3 PickUP Tournaments presented by Positive Tracks. The tournaments are a community activation program designed to engage young people across the US and several international locations through the game of soccer, broaden their perspectives and make them aware of the challenges facing young people in developing countries, and provide financial support for life skills and HIV prevention intiatives with at-risk young people in Africa. 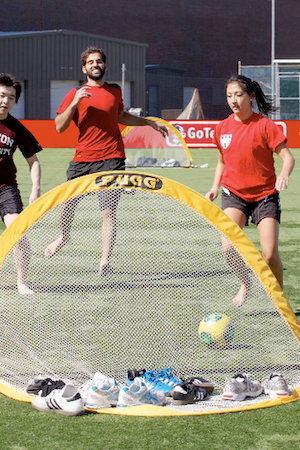 Over the last 20 years, PUGG goals have become an essential part of the soccer landscape across North America and many other parts of the world.  This humble, quirky invention has helped revolutionize training options for coaches and created fun opportunities for developing players’ skills.  From youth complexes in the U.S. and training pitches of the German Bundesliga, to dirt fields clinging to hillsides in South America and spottily-covered grass parks in China, PUGG goals and many smiles can be found where ever people are playing soccer.

As part of the partnership, PUGG is providing goals to be used at tournaments, and as incentives for tournament teams. For each set of goals sold through their website, www.pugg.com, PUGG is donating $25, the cost to put one young person through a Grassroot Soccer program in Africa. They are also offering Grassroot Soccer supporters a special offer of $15 off their qualifying online purchase when they use the code GRS3V3 at checkout.

PUGG inventor and founder Bob Armell noted “PUGG has sent its products to places where soccer helps bring joy to kids’ lives. Our ambassadors have reached schools in rural China, children’s homes from Mexico to Brazil, missionary outreaches in Eastern Europe, and Peace Corps outposts worldwide. But no relationship is more long-standing than ours with Grassroot Soccer. We are humbled to play a role in their great work. Since 2002, PUGG Company helped whenever GRS co-founder Ethan Zohn asked.  We are excited now to be the official soccer goal of Grassroot Soccer’s 3v3 PickUP series.” 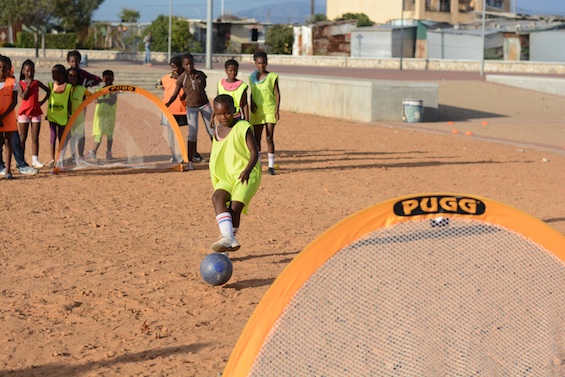 “We are fortunate to be working closely with a great company like PUGG and their iconic goal that has set the standard in small-sided soccer games,” said Grassroot Soccer President & COO Rob Adams. “Having their partnership as the official goal of the Grassroot Soccer 3v3 PickUP series provides critical support for the health education and life skill programming work we do with young people in challenging environments all over the world.”

Grassroot Soccer (GRS) is a non-profit organization founded in 2002 that uses the power of soccer to educate, inspire, and empower youth to stop the spread of HIV.  The vision of GRS is a world mobilized through soccer to create an AIDS-free generation. GRS has a global reach, with flagship sites in South Africa, Zambia, and Zimbabwe. Founded by four professional soccer players, Grassroot Soccer is mobilizing the most vulnerable population of youth ages 13 – 18 to break the cycle of AIDS by engaging local coaches who equip young people with the knowledge, skills and support they need to avoid HIV.  For more information visit grassrootsoccer.org

Sometime in the late 20th century a man in Boston said to himself, “Winter is over and it’s time to play!” So he went back to the game, the pick-up game, the one played every Spring-Summer-Fall between the softball fields at Cleveland Circle. Every now and then the same argument would break out with cries of “Goal” and “No Goal”. Eventually one side would concede but there were always doubts. Then one day after a game with several disputed goals, an idea with a picture formed itself over the man’s head. The caption under the picture read, ‘pick-up-game-goal’ and the man built the idea and branded it PUGG. He gave a set to his friends at Cleveland Circle. They were very impressed and played with them for years.

The full line of PUGG products can be found at PUGG.com, and at soccer and sporting goods shops all over.

PUGG.  It’s not a game without a GOAL.