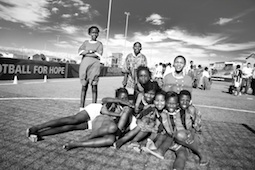 The scheme, which is the first of its kind, gave tens of thousands of Cityzens (Club members) the opportunity to pledge £5 ($8 US dollars) to six charity football projects across the world.  A £400,000 ($600,000 US dollars) charitable fund has been split between projects in Cape Town, Kuala Lumpur, Manchester, Melbourne, New York and Barranquilla. Through the power of football, the projects will improve the lives of more than 2,000 young people in disadvantaged communities.

Mphakiseng Molefe, one of the project leaders for Girls First, said: “Girls First is using the power of soccer to teach girls about HIV and AIDS, empower them in terms of their self-confidence and their self-esteem, how to deal with gender-based violence, how to break gender norms and bring gender equality.”

Find out more information about Cityzens Giving and the other projects making a difference, at mcfc.co.uk/cityzensgiving.

Changing the Game for Girls