Grassroot Soccer Partners with One Young World on Global Stage

UPDATED OCTOBER 9: For a full re-cap of GRS’s participation in the One Young World 2013 Summit, please visit this page on our site.

Young leaders and distinguished luminaries from around the world will be convening in Johannesburg, South Africa for the One Young World Summit from October 2-5, and Grassroot Soccer will have the opportunity to participate on this global stage. GRS will be playing a key role at the opening ceremony at Soccer City, on panel presentations during the Summit, and at a breakout session hosted at the Nike Training Centre in Soweto. Six GRS Coaches are delegates to the Summit and will be adding their voices to this important youth leadership event. 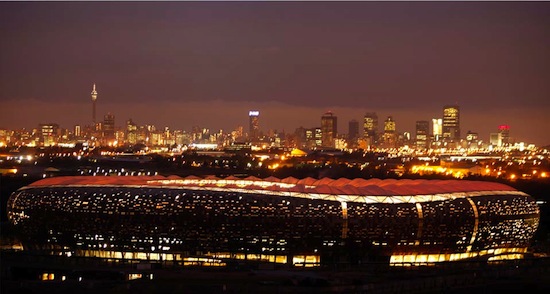 Johannesburg will host delegates from around the world for the One Young World Summit 2013.

One Young World (OYW), founded in 2009, is a London-based charity that gathers together young people from around the world, helping them make lasting connections to create positive change. OYW stages an annual Summit where the young delegates, backed by One Young World Counsellors, debate and formulate solutions for the pressing issues the world faces. Counsellors for 2013 include founder of the Virgin Group Sir Richard Branson, tennis legend Boris Becker, UN Foundation President and CEO Kathy Calvin, South African rugby legend Francois Pienaar, Barclays Chief Executive Antony Jenkins, and former UN Secretary General Kofi Annan, among many others. No youth-dominated event outside the Olympic Games brings together more countries than One Young World. After each Summit, the newly-minted One Young World Ambassadors work on their own initiatives or lend the power of the One Young World network to those already in existence.

The Summit will kick off on October 2nd, with Grassroot Soccer South Africa partnering with One Young World and the City of Johannesburg to bring thousands of high school children to the opening ceremony at Soccer City. Grassroot Soccer Coaches from Alexandra, Orange Farm, and Soweto will partner with One Young World Ambassadors to ensure a night to remember. GRS will coordinate logistics collecting children from schools across Johannesburg. Once at the stadium the school groups will be met by flag bearers representing 150 countries and participate in activities and discussions facilitated in the stands by GRS Coaches. Thereafter they will witness the opening ceremony and the inspirational keynote address of Kofi Annan.

Panel highlights involving GRS will include special sessions on HIV & AIDS: The New Challenge and Sport & Society, along with a breakout session where delegates will visit the Nike Centre in Soweto to learn about HIV & AIDS and Sport from the GRS team.

For bios of our GRS Coach delegates to the Summit, along with updates as the Summit convenes, please click here.