On August 17 and 18, the Wellesley, Massachusetts community came together for a day and night of soccer, and one of our biggest fundraisers of the year– 18 Hours of Barefoot Soccer. This year’s fourth annual event, held at Hunnewell Fields in Wellesley, MA did not disappoint, bringing in over 250 participants and spectators and raising over $12,000 dollars for Grassroot Soccer! In addition, the 18 Hours of Soccer Tournament is co-sponsored by GRS partner Positive Tracks, amplifying the fundraising impact of youth participants even further. 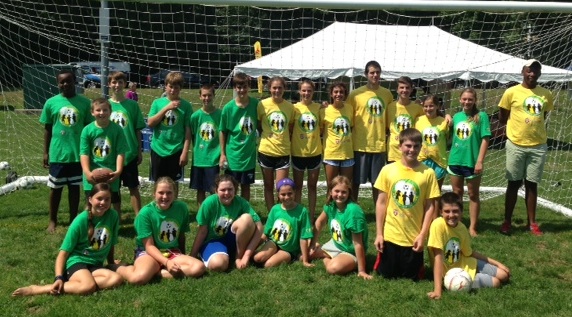 The idea for this tournament began with Wellesley resident and GRS supporter Peter Diana and his son, who had an idea of playing barefoot soccer from the day into the night. This year’s 18 Hours of Barefoot was organized by John Sivolella, his family, and an incredible group of volunteers including many from the Wellesley Soccer Club.

The 18-hours were jam-packed with lots of laughter, delicious treats and an intense amount of barefoot 3v3 soccer for all ages! At one point we saw a grown man challenging a group of kids in a heated soccer match. Shoeless youth participants and their supporters braved the hot and sunny fields of the day, and played under the lights all night to show support for GRS coaches and youth throughout Africa.

We are already planning for the fifth annual 18 Hours of Soccer, so please contact us if you would like to get involved or learn more.

Grassroot Soccer would like to thank the Wellesley Soccer Club, The 18 Hours of Barefoot Team and all of the amazing volunteers for hosting another awesome event, the team at Positive Tracks for fueling youth philanthropy and amplifying the impact of the tournament, and the entire Wellesley soccer community for coming out to further our mission to stop the spread of HIV using the beautiful game!