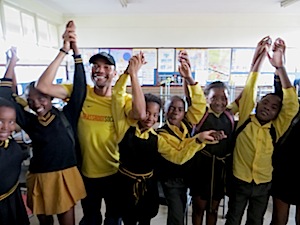 Coach Potro (with hat) and his GRS students

“My supporters, are you with me?!”, shouts a Grade 8 learner from Alexandra High School, her eyes closed and her arms folded. Surrounding her in a tightly-knit circle are her friends and fellow learners who, with enthusiasm and excitement, respond to her screaming, “YEBO”!

The learner then falls backwards, the weight of her body left to be caught by her encircled supporters. To her relief, the circle is up to the challenge, bracing her fall and showing her that support will always be there for her.

“Very good”, proclaims Grassroot Soccer (GRS) Skillz Coach Moses “Potro” Malabela. “Now you can see how important it is to surround yourself with people who can support and help you when you need it most. By building a team of friends, family and supporters, you can create a network of people that can pick you back up if you begin to fall down in life.”

While Coach Potro expertly delivers the My Supporters practice, one of the many fun and interactive sessions within the Grassroot Soccer’s Generation Skillz curriculum for teenagers, his participants aren’t aware of the personal connection he has to the practice. For Coach Potro, the GRS team became his supporters in a time of need, helping him to realize the importance of building a team.

Coach Potro grew up like most kids in Alexandra, South Africa, playing soccer on the streets from sun-up to sun-down, only going home once it was too dark to see his own feet. For Potro, soccer was an outlet; a way to stay away from drugs and crime and provide him with a group of teammates and supporters that could help him channel his energy into something positive.

Potro’s talent on the pitch led him to a sports academy at the age of 13 where he was able to increase his soccer skills. By the age of 18, Potro had been signed by Hellenic in the Premiere Soccer League (PSL), where he would eventually receive honors and recognition for his play.

“At that point in my career, I felt that I had made it. I was in the news all the time and had a bunch of fans,” said Coach Potro on his blossoming career. “With all that fame you begin to feel that nothing can stop you. I began to disregard my physical health and started partying every single night, even if we had a game the next day, because I knew that I would be in the starting lineup. I didn’t realize that I was beginning to let my team and supporters down by thinking that I did not need them in order to succeed.”

Potro’s behavior off the pitch eventually caught up with him. While playing for Amazulu, another side in the PSL, Potro’s lack of physical fitness led to a career-ending hamstring injury that caused him to be released.

Now back in Alexandra, unable to play the sport that he had been a part of his whole life, Potro began to drink heavily every day, losing track of the things he cared about most. Potro was in need of a team, one that could provide him with the help and support he needed. That was when Potro found Grassroot Soccer, and Grassroot Soccer was lucky to find him.

One day, Potro ran into an old friend of his who was wearing a bright yellow t-shirt with ‘Grassroot Soccer’ written across the front. Potro had seen people wearing these t-shirts in Alexandra since the World Cup and had wondered what they were all about.

His friend explained to him that GRS was an organization that used soccer as a tool in the fight against HIV, implementing sport-based activities to teach kids about alcohol and drug abuse and other risky behavior that can lead to contracting the virus.

As soon as he heard the words “alcohol abuse”, Potro knew he wanted to be a part of GRS. He realized that if he could show just one learner in Alexandra the perils of alcoholism, his heart would be fulfilled.

Little did Potro know that, once joining GRS, reaching out to just one learner was about to become a whole lot more. Since becoming a Skillz Coach two years ago, Potro has graduated over 500 learners in and around Alexandra through his programs, an experience that, for him, has been a personal journey to see life in a new and fun light.

“I now have something to look forward to each and every day. My GRS team provides me with the support I need day-in and day-out. I also get to make a positive difference in my community. If a participant comes up to me and says that I’ve changed their life, I know that I’ve done my job, changing my own life in the process too.”

Editor’s note: Thanks to Karl Alexander for story and photos.