Grassroot Soccer has recently piloted a new curriculum for youth that uses gender issues as a foundation to discuss healthy sexual behavior and to ultimately stop the spread of HIV. Generation Skillz Utshintsho (meaning ‘change’) is a seven-practice curriculum that targets high school learners.

Grassroot Soccer saw the need to develop Generation Skillz Utshintsho after collecting baseline results from a randomized controlled trial (RCT) that is evaluating the impact of GRS’ Generation Skillz program. Almost 4,500 high-school age participants in Port Elizabeth and Cape Town, South Africa, took a 170-item sexual behavior survey. Their responses were analyzed and presented to GRS for curriculum design purposes. Some of the most useful and relevant statistics were the following: 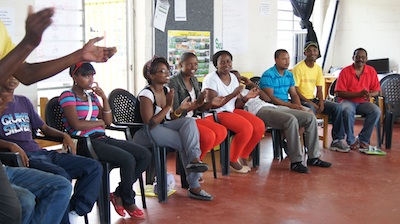 Based on these statistics, GRS saw the need for a gender-based curriculum with mostly split-sex practices. Included in the curriculum are discussions and lessons around gender-based violence, consequences of unhealthy behavior, identifying unhealthy and healthy relationships, power in relationships, conflict resolution, and identifying and practicing ways to both say and respect ‘no’.