LONDON, UK (March 4, 2013) – Grassroot Soccer announced today that international soccer star Freddie Ljungberg has joined the organization as an official Ambassador. Grassroot Soccer (GRS) is an international non-profit that uses the power of soccer to educate, inspire, and empower communities to stop the spread of HIV. As an Ambassador, Ljungberg will spread the GRS vision of a world mobilized through soccer to create an AIDS-free generation. 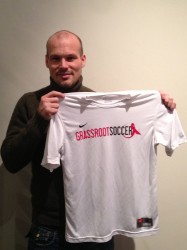 Ljungberg, originally from Sweden, had an illustrious 17-year playing career that included captaining the Swedish National Team and a successful 9-year stint with Arsenal FC. He played a critical role in Arsenal’s success throughout the early 2000’s when the Gunners were considered ‘invincible.’ Other highlights include a spell with West Ham United, prior to moving over to the MLS and playing for both the Seattle Sounders and the Chicago Fire.

Ljungberg first became interested in GRS’ work after spending time in the township of Khayelitsha, South Africa, where GRS has an extensive program. He says: “I traveled to Cape Town on holiday with my best friend and his children (who I am godfather to). We took a tour of the Khayelitsha township and I was shocked at the poverty. Watching the children run around in these terrible conditions really affected me. But the most impactful part of the trip was when we returned home and the kids asked if they could give some of their toys to the less privileged children as they had so many and the kids in Africa had none. How could I not get involved? I’ve had a blessed career on and off the pitch and I really wanted to give back.”

Grassroot Soccer Founder and CEO Tommy Clark remarked: “We’re thrilled to have Freddie on the team. We’re dedicated to communicating and connecting with young people on how they can prevent HIV and promote healthier communities. Freddie is passionate about both soccer and our work, and to have him reinforce these messages amplifies their impact. It’s a perfect fit.”

As an official GRS Ambassador, Ljungberg joins former Arsenal teammates Robert Pirès, Bacary Sagna (currently playing for Arsenal), and Alex Song (currently playing for Barcelona FC), along with US National Team member Oguchi Onyewu. In fact, his soccer friends had a strong influence on his decision to join: “Robert and I are good friends. We’ve had many great experiences together on and off the pitch. I am excited to join him on the Grassroot Soccer team.”

Founded in 2002 by four professional soccer players, Grassroot Soccer is mobilizing the most vulnerable population of youth ages 12–19 to break the cycle of AIDS by engaging local coaches who equip young people with the knowledge, skills and support they need to avoid HIV. GRS has programs in multiple countries with flagship sites in South Africa, Zambia and Zimbabwe. To date GRS has graduated over 565,000 youth through the program. By World Cup 2014, GRS aims to reach 1 million young people.

A key element to the Grassroot Soccer model is using the universal language of soccer to connect with youth. As Ljungberg reflects, “I’ve had the privilege of playing in Sweden, England, the USA and Japan and football is truly the universal language. At Arsenal, we would have 10 players on the pitch who all spoke different languages, but we were able to communicate and express ourselves through football.”