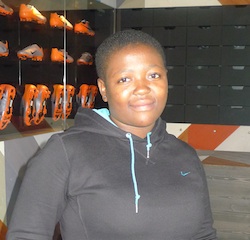 As a graduate of three Grassroot Soccer programs, sixteen-year-old Palesa Tauhadi is an excellent example of how different GRS curricula address different age and gender-specific issues. In 2009, as a seventh grader, she became one of GRS Soweto’s first Skillz 1.1 graduates. A year later, she completed the Skillz Holiday program. In 2011, she graduated from Skillz Street—GRS’s program designed specifically for girls. She remains an active student in grade 10 and takes additional courses at the University of Johannesburg.

Palesa feels that her involvement with Grassroot Soccer is helping her live a healthy lifestyle. She makes a conscious effort to avoid the risky behaviors she learned about in the program, such as drugs, alcohol and unsafe sex. Palesa also voluntarily received HIV testing and counseling for the first time during GRS Soweto’s 2011 Skillz Street program.  She remembers the impact of that day and plans to test regularly.

“[Testing] helped me a lot because…it was the first time that I knew my status. It made me feel positive about myself. I wanted to stay negative.”

In addition to gaining the confidence and wisdom to test, in true GRS fashion Palesa demonstrates the power of compassion and understanding. Through GRS, she learned not to judge other people if they have HIV, but instead to reach out and embrace them. Palesa explains, “I should always support all my schoolmates, my community, my coaches—whether he or she had HIV, I should support them because I have made a decision that I will take care of this person.”

Palesa hopes that others can follow in her footsteps “Grassroot Soccer,” she reflects, “is the best way to open your future…They teach you about the goods and bads of life and how not to get HIV…The coaches must not stop what they are doing because it is good in our community.”