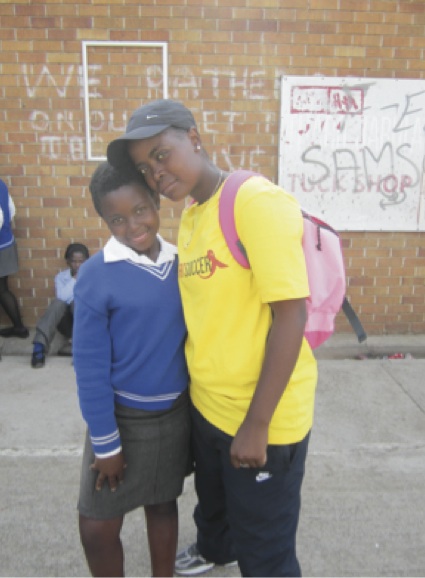 Soweto Coach Duduzile “Brown” Ndlovu could tell that Zikhona did not look happy on the first day of Skillz Street—a Grassroot Soccer program specifically designed for girls. Shy and reserved, Zikhona was concerned about getting in trouble for arriving home late, as she needed to travel a great distance. Since Coach Brown also lived far from the program, the two began to travel home together regularly. Although Zikhona said little during the initial practices, the travel times gave Coach Brown a chance to get to know her better. Zik hona opened up to Coach Brown about her home life, explaining that both of her parents had passed away. She lived with her older sister who needed to care for her own children and was dependent on government funding. Coach Brown reassured Zikhona that she was there for support whenever needed.

As the practices went along, Zikhona became more and more comfortable involving herself in discussions and activities. Coach Brown recalls: “The first time she started talking, I actually gave her praise: ‘Wow, you have brilliant answers! You should start talking out more.’ After that, she became an out- spoken person in the team, always giving suggestions and being part of the discussions.”

During the “Player Profile” activity, participants had an opportunity to reflect on their strengths and interests. Coach Brown found this activity played a central role in Zikhona’s development throughout the program, helping Zikhona become more in touch with herself. “That’s when her self-efficacy was built up,” says Brown. Zikhona’s confidence also grew during the program’s Fair Play soccer matches, which allowed participants to make their own rules and resolve their own conflicts. Brown was excited to see Zikhona volunteer to be team captain during one of the final practices, a reflection of Zikhona’s growing pride in participation.

Coach Brown was moved by a comment Zikhona made towards the end of the program: “She told me something that really touched me. She said that whenever she comes to Skillz Street she feels so happy to see me because she sees me as a sister figure. She doesn’t normally get a person that hugs her, a person that tells her she loves her, a person that teases her—just that small attention she needs. After she told me that, I realized that…I also saw her as a little sister because she looked up to me with everything she did.” With her growing awareness of her position as a role model, Coach Brown became more conscious of her own habits.

“There was a point after she said she saw me as a sister figure, whereby I decided I needed to implement certain changes in my life. If a person sees you as a mirror reflection, you shouldn’t let that person down.” ~ Coach Brown

On Graduation Day, Zikhona gave Coach Brown a letter expressing her appreciation and promised that she would never forget the friendship they had built.

Reflecting on Zikhona’s participation in Skillz Street, Coach Brown states, “I feel that I impacted her a lot because Skillz Street is all about self-efficacy building. As she was a shy person, she developed her ability to be confident and talk out loud….From the beginning, she wasn’t keen on joining the program…but she stayed from the first day through the last day. She was never absent. I think Grassroot Soccer played a major role in her life.”

A Catalyst for Change