As part of Grassroot Soccer’s continued outreach, its curriculum stretches far beyond the classroom. Oftentimes, the most crucial of HIV educators are not visiting celebrities, but local heroes who have real links and roots within the communities. 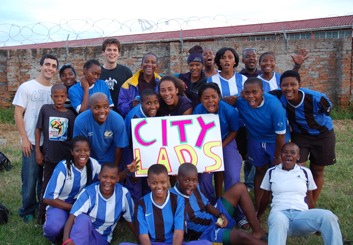 The City Lads and some GRS fans before the league championships

This is the exact situation that some of the players for the City Lads soccer team, of Port Elizabeth, South Africa, find themselves in. Involved with GRS since 2007, The City Lads features several players who work as GRS coaches in local communities. These players provide positive role models for the students participating in GRS and strong female leadership to recruit into the ranks of GRS.

The team had a highly successful season, winning the league title in East London, South Africa. The victory came over rivals Birmingham, whom the City Lads defeated 4-1 to capture the championship. With GRS’s own Ngwenya scoring twice from free kicks, the trouncing was as much a stylistic one as an emphatic one.

The league success earned the City Lads the chance to travel to the national championship tournament in Cape Town. The team showed great heart, playing attractive and attacking soccer and winning the support of many people. Unfortunately, they were unable to convert any of their chances into goals and they fell short of winning any games.

Despite the heartache suffered at the national championships, the successful year for City Lads has continued. As a result of their consistent quality throughout the season, three of their players have been called up to the South African national side – fondly known as Banyana Banyana, or The Girls. Such publicity for the City Lads can only benefit their impact when spreading the message of GRS on local and now international stages.

You can connect with the City Lads via Facebook here.