NEW YORK (May 7, 2012)- Sunday was a gorgeous day in New York as ten Reality TV stars pedaled through all five boroughs to complete the 40-mile TD Five Boro Bike Tour on behalf of friend, Ethan Zohn and his charity Grassroot Soccer (GRS). The GRS “Reality Riders” came together to support Zohn as he recuperates from his second treatment of a rare form of Hodgkin’s Lymphoma. 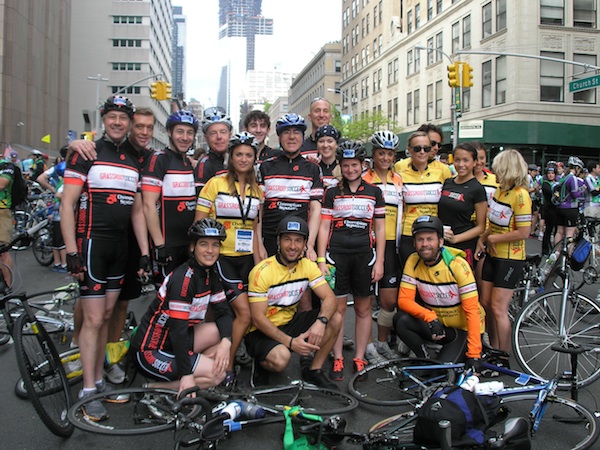 Team Grassroot Soccer just before the start of the TD 5- Boro Bike Tour.

“Ethan’s friendship has been a source of inspiration in my life,” said Team Captain, Erika Shay. “We all know how much Ethan loves to compete and wanted to ride in the bike race, so I jumped on the opportunity to organize a group of Ethan’s friends to ride for him.”

“Being able to support Ethan and Grassroot Soccer is truly a privilege for Champion System. Ethan is the meaning of inspiration,” said Kaylin. “I am very excited to be part of the team.”

Zohn, a reality TV star himself, used a portion of his winnings from CBS’ Survivor: Africa to Co-found Grassroot Soccer, an international non-profit working to prevent HIV and AIDS. He cheered for his friends and two brothers Lenard Zohn and Dr. Lee Zohn from his New York apartment. The GRS Bike Team also included Jimmy Conrad, former MLS and U.S. Men’s National Soccer Team star, along with several other GRS supporters.

“I’m thrilled to have Erika and the rest of my reality friends get involved with GRS. Their mission is my mission and I know they had a blast out there during the Tour for a great cause,” said Zohn.

Zohn Co-founded Grassroot Soccer with a group of close soccer buddies in 2002 to stop the spread of HIV. The friends had all played soccer in Zimbabwe together, where they witnessed the devastation of the AIDS epidemic first-hand.

The Grassroot Soccer Bike Team aims to raise $30,000 for Grassroot Soccer in the 2012 TD Five Boro Bike Tour. To date they’ve raised over $26,000. The funds will go towards providing HIV and AIDS prevention education to over 1,000 youth, furthering Grassroot Soccer’s goal of reaching 1 million youth by the Brazil World Cup in 2014.

In celebration of a successful bike race, the Reality Riders have curated exclusive Survivor and Amazing Race memorabilia to auction off on E-Bay. The auction will coincide with the finale of this season’s Survivor: One World and items will include: Survivor Finale Tickets, one-of-a-kind fan experiences with cast members, signed Jeff Probst items, show props, clothes and buffs.

Grassroot Soccer (GRS) is a non-profit organization founded in 2002 that uses the power of soccer to educate, inspire, and empower communities to stop the spread of HIV. The vision of GRS is a world mobilized through soccer to create an AIDS-free generation. GRS has programs in 10 African countries with flagship sites in South Africa, Zambia, and Zimbabwe. Founded by four professional soccer players, Grassroot Soccer is mobilizing the most vulnerable population of youth ages 12 – 19 to break the cycle of AIDS by engaging local coaches who equip young people with the knowledge, skills and support they need to avoid HIV. For more information visit grassrootsoccer.org

Ethan Zohn is a co-founder of Grassroot Soccer and is responsible for oversight of our US project, including corporate sponsor cultivation and technical program management. In 2002, Ethan was the winner of CBS’ television program ‘Survivor Africa’, and he works to harness his celebrity for the benefit of Grassroot Soccer. Ethan is a graduate of Vassar College, and he has played and coached soccer professionally in Zimbabwe, the United States, and as a member of the US National team for the 1997 and 2001 Maccabiah Games in Israel and 2004 Pan-American Maccabiah Games in Chile. In recognition for his work Ethan was awarded the 2004 Nkosi Johnson Community Spirit Award by the International Association of Physicians in AIDS Care, the Heroes Among Us Award from the Boston Celtics and the Massachusetts State Health Department, and the Auxilia Chimusoro Award from the US State Department in Zimbabwe. In August 2008, Ethan embarked on a record-breaking 550-mile journey on foot, from Boston, MA to Washington, D.C., dribbling a soccer ball the entire route, to raise money and build awareness for GRS.

This year, Bike New York is celebrating the 35th anniversary of the TD Five Boro Bike Tour presented by Eastern Mountain Sports, held Sunday, May 6, 2012. Held annually the first Sunday in May, the TD Five Boro Bike Tour is America’s largest cycling event. The Tour is produced by Bike New York, the city’s premiere bicycling organization, in association with the City of New York and the New York City Department of Transportation. The event provides participants the unique and fun experience to bike through all five boroughs – a 40 mile, traffic-free ride for 32,000 cyclists. Proceeds from the event fund Bike New York’s education programs. For more information visit: www.bikenewyork.org/ride/five-boro-bike-tour/

Champion System specializes in the production of high quality custom technical apparel for a wide range of sports.  Our company was founded by competitive cyclists who have combined their strong 30 year knowledge of the apparel business with their love of the sport.  From day one we were determined to create a company that would take an entirely new approach to custom technical apparel by offering the finest pro quality garment across all sports divisions.  We are a fully vertical international company with our own manufacturing facility and offices in 22 countries. For more information visit www.champ-sys.com