Robert Pirès, a major star in the soccer world, has signed on as an Ambassador for Grassroot Soccer, an international non-profit that uses the power of soccer to save lives by preventing the spread of HIV and AIDS among youth in Africa. Grassroot Soccer (GRS) envisions a world mobilized through soccer to create and AIDS-free generation. 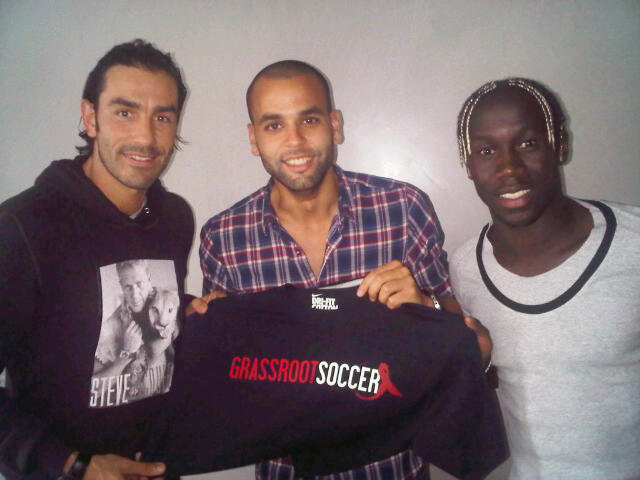 “I am very excited to join the Grassroot Soccer team. For me, soccer has always been a way I can express myself. Grassroot Soccer uses the language and beauty of the game to break down barriers, build trust, and educate young people to adopt healthy behaviors. Soccer becomes part of the solution,” said Pirès. “Another thing that stands out to me about Grassroot Soccer is the way messages are delivered by role models who the kids can relate to. Growing up, my father was a powerful role model for me – I have great memories of riding on the bus with him to watch him play; I understand how important this is for young people.”

Founded in Zimbabwe in 2002 and now active throughout southern Africa, Grassroot Soccer trains local role models – soccer players, teachers, community leaders- to deliver an interactive AIDS prevention and life skills curriculum to at-risk youth. Over 470,000 young people have gone through the program. By World Cup 2014, GRS will educate 1 million young people about AIDS and how to live healthy, productive lives.

Just like the Grassroot Soccer participants on the right, GRS Ambassadors Robert Pirès and Alex Song may face off on the pitch, but they are united when it comes to stopping HIV.

Since his professional debut in 1993, Pirès has been a strong presence on the international soccer scene. He was a standout player for the French National Team, helping them to victory in the 1998 FIFA World Cup. During his time at Arsenal in the Barclays Premier League, he won three FA Cups and two League titles, including the club’s famous unbeaten season of 2003-2004. He has also played for Spanish side Villareal and Barclays Premier League club Aston Villa.

Pirès also noted: “During my time as a professional player, I have learned so much from my teammates with African ties about both the challenges and opportunities facing Africa. When my good friend Bacary Sagna became a GRS Ambassador, I wanted to learn more about the organization, and it proved to be a perfect fit. ”

To view some of Robert Pirès’ greatest goals, see the video below.

Grassroot Soccer Partners with Waves for Change for Holiday Camp