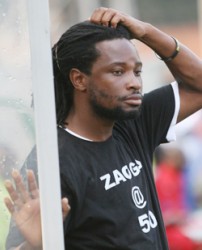 A major figure in the Zimbabwe soccer world and a key player in Grassroot Soccer Zimbabwe is promoting male circumcision as an HIV prevention tool in a very personal and direct way: by having the procedure himself. Mkhuphali ‘Mr. Cooper’ Masuku, head coach of the Highlanders Football Club, and Grassroot Soccer coach, recently got circumcised and is publicizing his decision in order to set an example for other men.

The Highlanders are a highly popular professional soccer team from Bulawayo, the home community of GRS Zimbabwe. GRS was founded by four former Highlanders players, and the GRS – Highlanders connection remains very strong.

“I got circumcised last week on Thursday and I am slowly recovering. I have been with Grassroot Soccer for over eight years, as a coach, mentor, and advocate for teaching youth about HIV and AIDS prevention. Through facilitating the GRS curriculum, I am keeping myself informed about the growing facts of HIV prevention and treatment,” commented Masuku.

“We now know that male circumcision decreases the male rate of contracting HIV by 60%. Male circumcision also reduces the risk of contracting a number of sexually transmitted infections. These facts and my passion to be a role model to the youth I work with have led me to decide to be circumcised, “ said Masuku. He concluded, “I want to encourage all of my players, teammates, friends and youth to get circumcised as well.”

According to the World Health Organization, there is compelling evidence that male circumcision reduces the risk of heterosexually acquired HIV infection in men by approximately 60%. Three randomized controlled trials have shown that male circumcision provided by well-trained health professional in properly equipped settings is safe. GRS incorporates this research into our curriculum by advocating male circumcision as one part of a holistic response to the AIDS epidemic in southern Africa.

Coach Masuku’s decision has already had an influence – days after his decision, another GRS team member and former professional soccer player, Wonder Mpofu, was inspired to get circumcised as well. Mpofu was a bit hesitant at first, but he says that with Masuku’s example and his urging, he was inspired to action. Mpofu commented: “I encourage young people to go and do it [get circumcised] to reduce the risk of getting HIV and AIDS.  It is nice to work at GRS because most young people don’t know what HIV and AIDS is. GRS is teaching children from a grassroots level.  Most people coaching at GRS are soccer players – many former professional team players – and the children will listen to them because they are role models.”