Today in New York City, Ethan Zohn announced Grassroot Soccer’s 2011 ING New York City Marathon Team.  Made up of 65 runners from New York and around the world, the team includes several TV personalities and sports stars.  The Grassroot Soccer Team will participate in the 42nd ING NYC Marathon on November 6th with the goal of raising over $200,000 to educate 8,000 African youth in HIV and AIDS prevention and life skills.  They’ve spent the last few months preparing for the race, training for long distances and raising funds for Grassroot Soccer’s work in Africa.

“The 26 miles we’ll run on this course is equivalent to the $26 is takes to give one young person in Africa a life-saving opportunity to take control of their own future,” said Zohn.  “AIDS is still devastating Sub Saharan Africa, but that’s something we have the power to change.  Every member of the team is committed to making an impact.” 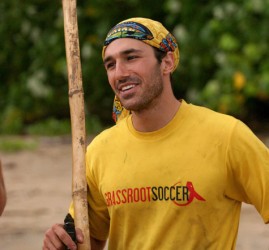 This is Grassroot Soccer’s 3rd year as an official charity partner of NYRR.  To date, the Grassroot Soccer Marathon teams have raised over $300,000, moving Grassroot Soccer closer to the goal of educating 1 million boys and girls in HIV and AIDS prevention education and life skills by the World Cup 2014 in Brazil.

“I dedicate each kilometer I run on November 6th and the funds raised to those affected and infected by the HIV virus,” Monyepao said.  “HIV and AIDS in South Africa is a prominent health concern…my country has more people with HIV than any other.  The number of those infected is larger than in any other single country in the world.  Grassroot Soccer has done a tremendous job here in helping to eliminate the disease, especially amongst the younger generation, our future leaders.  Together we’re giving HIV/AIDS the red card!”

“By the next World Cup in 2014, Grassroot Soccer will have educated 1 million young people about AIDS and inspired them to live healthier, more productive lives, strengthening communities across Africa.  The 2011 Grassroot Soccer Marathon Team will have helped us get there,” added Zohn.