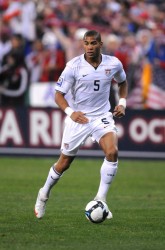 Oguchi Onyewu, a mainstay of the U.S. Men’s National Soccer Team and a defender for Twente Enschede of the Dutch Eredivisie football league, recently came on board as a Grassroot Soccer supporter.  Grassroot Soccer, an international non-profit focused on HIV prevention and a leader in the sport for development field, uses the power of soccer to educate, inspire, and empower young people in Africa to live healthy and productive lives.  The vision of Grassroot Soccer is “A world mobilized through soccer to prevent new HIV infections.”

Onyewu saw the power of the Grassroot Soccer (GRS) program during a U.S. Men’s National Team visit to the GRS Johannesburg site in conjunction with the 2010 FIFA World Cup.  He says “After seeing the GRS programs firsthand, and learning more about the direct impact they are having on so many young people, I am excited to support their work.  We have the potential to turn the tide on the AIDS epidemic, and I believe that the popularity of football can be a way to reach millions of youth with a positive message.”

Founded in Zimbabwe in 2002 and now active throughout southern Africa, Grassroot Soccer trains local role models – soccer players, teachers, community leaders- to deliver an interactive AIDS prevention and life skills curriculum to at-risk youth. Over 380,000 young people have gone through the program. The goal is one million Grassroot Soccer team members by the 2014 World Cup. 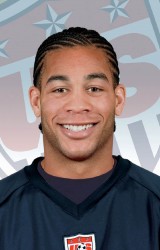 Onyewu has played for the U.S. National Team on the senior level since 2004, including appearances in the 2006 and 2010 World Cups. He began his professional career in Europe in 2002, and received the 2006 U.S. Soccer Player of the Year award from the U.S. Soccer Federation.

Onyewu joins professional player Bacary Sagna, of the Arsenal Football Club and the French National Team, in support of GRS.