Richard Hatch Competes For Grassroot Soccer on The Celebrity Apprentice

When “The Celebrity Apprentice” premieres on NBC this Sunday, March 6th, Grassroot Soccer will be the charity of choice for contestant Richard Hatch.  Hatch will be competing with 11 other celebrity contestants, who will not be vying for a job with Donald Trump; instead, the business-savvy celebrity contestants will be working towards a greater goal as they raise money for their various charities throughout the season. Not only will the final winner be crowned The Celebrity Apprentice, but he or she will also have the honor of delivering a $250,000 bonus check to their designated charity. All of the celebrities will be competing in business-driven tasks around New York City, using their fame along with their business acumen to win challenges, while ultimately raising money and awareness for their respective causes. (Source: www.nbc.com)

Richard Hatch had this to say about his role on the hit NBC show:  “I’m playing for Grassroot Soccer, co-founded by my friend Ethan Zohn, which uses the power of soccer to educate youth about the dangers of HIV/AIDS. Tune in for the Premiere March 6 on NBC, and watch me give The Donald (and Grassroot Soccer) everything I’ve got!”

Founded by former professional soccer players in 2002, Grassroot Soccer (GRS) trains African soccer stars, coaches, teachers, and peer educators in the world’s most HIV-affected countries to deliver an interactive HIV prevention and life skills curriculum to youth. Translating research into action, GRS attracts and engages young people through schools, community outreach, and social multimedia (e.g. magazines and TV). GRS has educated more than 375,000 kids via its ‘Skillz’ curriculum, and is a leader in the sport for development movement.

Hatch and GRS Co-Founder Ethan Zohn met through their roles as winners of the CBS hit television reality show “Survivor”;  Hatch was the Season 1 winner and Zohn was victorious in Season 3. 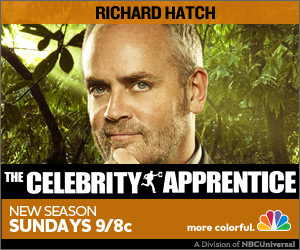 For more about NBC’s “The Celebrity Apprentice” click here.

View a video clip of Richard Hatch describing why he chose to play for Grassroot Soccer as his charity.