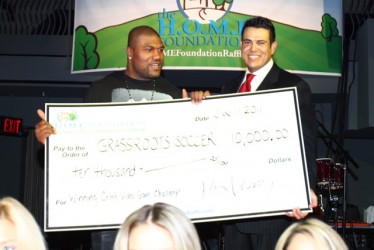 On Tuesday, January 11, 2011 some of the biggest names in sports and entertainment came out to raise money and awareness for five amazing non-profits.  Junior Achievement of Southern California, The Intrepid Fallen Heroes Fund; I’m Too Young For This! Cancer Foundation, The Trevor Project and Grassroots Soccer are all organizations making a difference locally and globally, and which have strong support from the Hollywood community.

“High School Musical” star Zac Efron came to the party with his cancer survivor cousin Emily Hobson who is the Regional Chair for the LA Chapter of I’m Too Young For This! Cancer Foundation, the charity that Zac was there to support.  Zac was emotional on the red carpet when he spoke about his “lifelong best friend “and cousin Emily being cancer free and the importance of the work that i2y Cancer Foundation does is to support young adults with cancer.  12 time GRAMMY nominated hip-hop artist Snoop Dogg attended the benefit with his wife Shante Broadus and their son.  Snoop expressed his heartfelt pride about his wife’s “I Am Shante” foundation’s charity work to help empower women and was excited to discuss his youth football league which he started over 7 years ago to give back to children in his community. 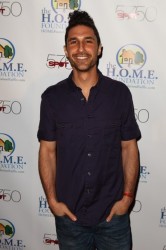 Ethan Zohn, co-founder of Grassroot Soccer and winner of Survivor Africa, represented GRS at the Challenge.

Super Bowl Champion, co-host of “FOX NFL Sunday” and actor Michael Strahan attended the benefit with fiancé Nicole Murphy in support of The Intrepid Fallen Heroes Fund, which takes care of our brave servicemen and women.  Michael had a personal commitment and wasn’t able to stay for his highly anticipated Madden Football video game battle against Zac Efron, but the two stars plan to schedule a rematch on behalf of The Intrepid Fallen Heroes Fund and I’m Too Young For This! Cancer Foundation, two of their favorite charities.  Michael Strahan assured the celebrity video game tournament organizers, “I’m very excited for this epic video game battle against Zac and I assure you that I wasn’t scared and dodging the “High School Musical” star at last night’s benefit.  I look forward to rescheduling our Madden Football match and to waking away a Champion in honor of The Intrepid Fallen Heroes Fund.”

The final matchup was between WWE Champion Mike “The Miz” Mizanin who represented The Trevor Project and UFC Champion and actor Quinton “Rampage” Jackson who represented Grassroot Soccer.  They battled it out in a game of UFC Undisputed 2010 where Rampage played himself in the game and The Miz played UFC star Forest Griffin.  There was a lot of smack talking between the two finalists and The Miz and Rampage were both intent on being victorious for their charities.  Comedian Brad Sherwood (“Whose Line Is It Anyway”) was the play-by-play commentator for the final matches and was cracking jokes about both contestants that kept the crowd roaring.  The finals was a best 2 out of 3 games and Rampage won the first game against The Miz in under a minute with a fierce knockout and he won the second game in under two minutes crowning him the Champion. 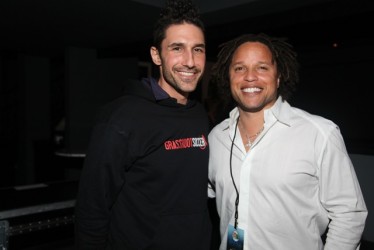 GRS co-founder Ethan Zohn was the GRS representative for the event. He poses here with former US National player Cobi Jones.

Frank Verdugo, President of the H.OM.E. Foundation, the event’s proud title sponsor, presented Rampage with a check for $10,000 to Grassroots Soccer onstage while the crowd went wild and cheered their Champion.  Rampage said he was in South Africa while promoting his film “The A Team” last year, and he saw firsthand the devastating effects HIV and AIDS has on the people there.  Rampage said that he is so moved that his win in the tournament would help Grassroot Soccer continue their incredible work to fight HIV and AIDS in Africa via education.  “Grassroot Soccer is so honored that Quinton “Rampage” Jackson displayed the skills of a true champion and emerged as the $10,000 winner of the H.OM.E. Foundation’s STIKS Celebrity Video Game Challenge For Charity.  This money will enable GRS to provide the knowledge, life skills and support to hundreds of African youth so they can live HIV free and make the right choices in life”, says Ethan Zohn, founder of Grassroot Soccer and winner of “Survivor.”  Debra Stone from TY KU presented Rampage the Champion with a special gift set, which included TY KU Asian Superfruit Liqueur, Soju Low Cal Vodka alternative (to make “skinny cocktails”) and their premium Junmai Ginjo Sake.

Guests were greeted by NikkiZ Angels’ cheerleaders decked out in Team Threadz uniforms when they entered the party while Queen’s anthem “We Will Rock You” played getting everyone in the mood for some healthy competition.  Aerial artists soared high through the sky as go-go dancers had partygoers joining them on the dancefloor while DJ Cobra, accompanied by live drummer Griffin created an electrifying set.  Girl group BG5 seen on the hit TV show “Keeping Up With The Kardashians” performed two songs and California rap duo, The PAPERMATE$ performed their “STIKS” theme song accompanied by two electric violinists onstage.  Guests enjoyed custom cocktails provided by TY KU, and gourmet snacks and delicious desserts all in the gorgeous multi-media event space at Spot 5750. Frank Verdugo, President of the H.O.M.E. Foundation, announced the launch of their signature H.O.M.E. Foundation raffle at the party and explained to guests how they can continue support their favorite non-profits via the raffle, while winning fabulous prizes like a $1 million dream home in Los Angeles.  As guests left the party, they were treated to Urban Detox by Function Drinks to keep them refreshed and hydrated.

About The H.O.M.E. Foundation:

The H.O.M.E. Foundation believes that helping others means everything. Our mission is to help charities reach their fundraising goals and to bring awareness to their praiseworthy causes. We’re excited to announce the launch of our H.O.M.E. Foundation Raffle, with the grand prize being a fully furnished luxury home in Los Angeles, along with hundreds of thousands of dollars in additional prizes, which will serve as a fundraiser for deserving non-profits across the country.  www.HOMEFoundationRaffle.com

About Junior Achievement of Southern California:

Junior Achievement utilizes the time and talent of over 4,000 volunteer mentors to inspire and empower 100,000 SoCal youth through entrepreneurship and financial education!  JA’s mission is to inspire and prepare young people to succeed in a global economy.

About The Trevor Project:

About The Intrepid Fallen Heroes Fund:

Grassroot Soccer uses the power of soccer to educate, inspire, and mobilize communities to stop the spread of HIV.  To achieve our mission, we continuously improve our innovative HIV prevention and life-skills curriculum, share our program and concept effectively, and utilize the popularity of soccer to increase our impact.  By working within this existing structure and by training role models – pro players, coaches and youth players themselves – to get the message out about healthy behavior and the risks of HIV, we have shown that we can break stigmas, dramatically increase awareness, change behaviors, and turn the tide against HIV.  GRS realized that the true power of soccer has always been connections that it creates between people. Using footballers as role models, and using the popularity of soccer to engage hard to reach young people, GRS has combined social theory, public health methodologies, rigorous evaluation and a huge dose of passion.  grassrootsoccer.org

About I’m Too Young For This! Cancer Foundation:

70,000 young adult Americans age 15-40 are diagnosed with cancer each year; one every eight minutes. The I’m Too Young For This! Cancer Foundation is the nation’s largest support community for this next generation of patients, survivors and caregivers. Connect online at http://StupidCancer.com.

Function Drinks is a line of physician-developed functional beverages, designed to enhance an active lifestyle.

TY KU is a Premium Asian Wine & Spirits Company whose portfolio is based on the premise that ingredients matter, striving to create a wiser way to drink for consumers who care about what they put in their bodies. Combining premium all natural ingredients, age-old distillation/brewing techniques, modern flavor profiles and award winning packaging, TY KU blends Eastern tradition and Western ingenuity, embracing the company’s Mantra of “Respect Tradition, Embrace Tomorrow”.

Los Angeles based duo the PAPERMATE$ are rising fast. Having performed at venues from the legendary House of Blues to their native hometown’s Michigan State University; they’ve developed a sound that has undeniable mass appeal.  From landing a successful arch on MTV’s Daddys Girls to their latest single “Where’s Nicki” quickly garnishing the ears of major and online media outlets. The fast track for the PAPERMATE$ doesn’t seem to be slowing down anytime soon… http://thepapermates.com

About The E League:

Each season consists of 14 to 16 teams competing at a select, undisclosed venue in Los Angeles. After 13-regular season games followed by playoffs, a team is crowned champion and presented authentic championship rings.

These players are not only talented in their craft, but also on the court.