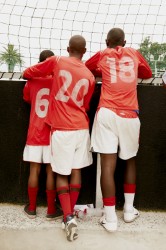 To mark World AIDS Day 2010, Grassroot Soccer Cape Town hosted a corporate Inspi(RED) soccer tournament on Saturday 27 November, inviting teams from Cape Town based companies to play at the prestigious Gianlucca Vialli Soccer 5-a-side centre.  All the money raised from the tournament was used to fund an Inspi(RED) Skillz HCT (HIV counselling and testing) tournament the following weekend in Khayelitsha.

Sixteen teams signed up to play in the Inspi(red) soccer tournament, including two community teams from the Khayelitsha-based league. GRS Cape Town brought in a range of local organisations in order to strengthen existing relationships, as well as to develop new ones. Other teams came from a diverse range of industries, including oil, transport, retail, finance and accounting. In addition, everyone took part in a high-energy Skillz session run by coaches to learn more about the GRS program.

With the money raised from the corporate event, GRS hosted a two-day HCT tournament in Khayelitsha the following weekend. In all, eighty local youth-league teams registered to play, and an incredible 922 people tested for HIV, through GRS’ testing partners; the Desmond Tutu Foundation, New Start and Shout It Now.

HCT tournaments are aimed at gathering a large number of community members while promoting testing, counseling and “Know Your Status” messages. Football is the linchpin for bringing players together to increase their awareness about HIV testing and treatment services and empowers them to know their status by promoting positive peer pressure. Onsite rapid HIV testing and immediate enrollment into care bridge the gap between HIV prevention and treatment services, and demonstrates the power of collective action in communities. 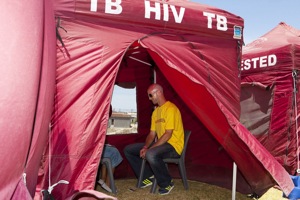 The event was attended by Bafana Bafana star and GRS ambassador Matthew Booth, and his wife, who both tested for HIV. Having such a high profile role model at the event was important motivation for more people to test.  In addition, all sites around South Africa conducted HCTs for World AIDS Day, testing over 1,200 people.

Furthermore, the HCT event was put on to celebrate the Football for Hope Centre’s first birthday. In just one year the centre and staff has achieved the following:

43 youth in the Pre-School Programmes .

30 youth in a Tutoring program.

252 youth in the FFHC Community League.

6060 youth graduated with Skillz Coaches operating from the FFHC.

For more information on the FFHC’s first year visit http://www.streetfootballworld.org/khayelitsha-one-year-later