The following is a People Magazine article written by Cynthia Wang on October 4,  2010. Click here to read the original article. 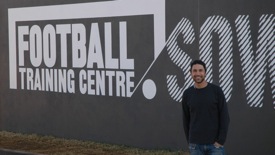 GRS Co-Founder and NYC Marathon Runner Ethan Zohn smiles in front of a new football facility in Soweto, South Africa this past summer.

Survivor: Africa winner Ethan Zohn was unable to race in the New York Marathon due to cancer treatments last year, so his pal, Bachelorette star Ryan Sutter, took his place. But now that Zohn is healthy, both men will run this year – against each other.

“Ryan and I have decided to compete against each other on the streets of NYC,” Zohn says, “but this is truly a celebration of great friends leading by example and using their fame to create change.”

The guys will start the Nov. 7 race together, but whomever finishes first earns bragging rights of more money earned toward his respective charity, Grassroot Soccer for Zohn and First Descents for Sutter.

“Ethan and I have been good friends for some time,” Sutter says. “His fight against cancer and his continued success with Grassroots Soccer are demonstrations of his incredible strength of spirit and kind heart. I look forward to competing on behalf of First Descents against Ethan and GRS to raise awareness and funds for two inspirational organizations.”

Zohn poured much of his $1 million winnings from Survivor: Africa into his charity, which brings the joy of soccer to African kids while educating them about AIDS and HIV. Sutter has been competing in endurance events all year on behalf of First Descents, a program that offers free outdoor adventure therapy for young adults with cancer.

“It seems scary,” Zohn says, “but there is no challenge too big for us … running marathons, curing cancer and putting an end to AIDS. Along with thousands of others, we are working to create a world without these issues.”