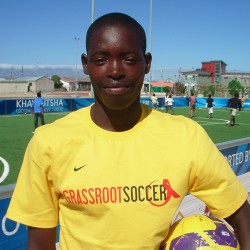 Turning the Tide Against HIV/AIDS

25 year old Andile Rafeni grew up in a local community on the outskirts of Cape Town. He dropped out of school in Grade 11 and turned to a life controlled by drugs and gangsterism. Andile’s life changed when he witnessed the tragic death of his best friend who was murdered for being HIV positive.

The death of his friend motivated him to take responsibility for educating himself about HIV/Aids so that he could, in turn, educate his peers and his community alike. Since joining Grassroot Soccer, a non-governmental organisation (NGO) that uses soccer to educate the youth about HIV/Aids, Andile has turned his life around by investing his time in educating and equipping young people with much needed information about HIV/Aids.

Andile is a coach at the Castrol Skillz Holiday Programme that is being being rolled out across the country in partnership Grassroot Soccer and Castrol. Using the universal language of sport the programmes delivers vital HIV/Aids prevention messages and life skills to youngsters between 12 and 18. The camps are being carried out in and around Bloemfontein, Cape Town, Durban, Polokwane, Port Elizabeth, Pretoria and Soweto, Richards Bay and Phalabrowa mining communities bringing the total number of camps to 45, touching the lives of 4 500 children across the country. The programme forms part of a Castrol legacy initiative as an official 2010 FIFA World Cup sponsor.

“Parents and guardians traditionally have a difficult time during the school holiday, especially if they work. The programme was designed to keep children occupied during this time while also imparting some vital life skills in the process. Teaching life skills and providing HIV/Aids education to young people is vital in our society, and what better way to do this than through the universal language of football,” says Bridget Nkuna, Castrol’s Corporate Investment Manager.

His experience as a coach for the Castrol Skillz Holiday Programme,  has made Andile think that if perhaps his community had been educated about HIV/Aids his friend would still be alive today.  “The community thought that by killing him they were getting rid of the disease. If there had been enough information and awareness about the virus, none of them would have reacted the way they did and murdered him but rather shown him support,” says Andile. 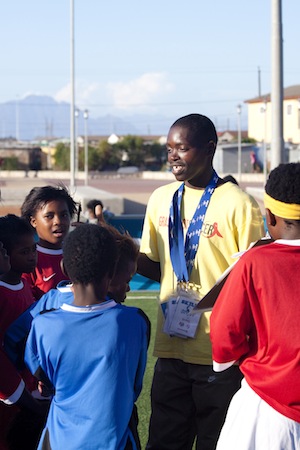 “Football is a great tool for breaking down social barriers, and with the increased interest and excitement of the 2010 FIFA World Cup South Africa™, it has become the ideal channel for communicating social messaging,” says Nkuna. “Through our partnership with Grassroot Soccer, we feel that we have identified the perfect opportunity to empower the youth with positive, self-affirming life skills and information that will serve them well into the future.”

During the intensive five day camp, Andile will provide coaching and mentorship to over 100 youngsters from the local community. Based on delivering important messages in a fun and engaging way, the Castrol Skillz Holiday Programme is made up of Skillz Sessions and soccer based activities. For example, in an activity called Take a Stand, a coach makes a statement such as ‘it is fine to have multiple sexual partners if you use a condom’. Participants then indicate whether they agree by putting their hands on their hips or put their hands on their knees if they disagree with the statement. They then have to explain to the group the reason for their choice. This is a game aimed at teaching the participants to stand up for their beliefs even in light of peer pressure.

“Programmes like the Castrol Skillz Holiday Programme play an important role in the fight against the spread of HIV/Aids and it is a privilege for me to be involved in an initiative that makes a difference in my community,” says Andile.

One of Andile’s goals for this year is to get young participants more involved in the game of soccer and, through the programme, educate them on how to protect themselves against contracting HIV/Aids or falling pregnant.

Andile says, “I want my peers to realise that HIV is a living human disease, not a death threat as they believe it to be. That way, they will become less ignorant and live healthier and more responsible lifestyles. There is still stigma attached to the virus and it is my personal goal to work towards breaking it down.”

Looking towards the future Andile wants to complete his Grade 12 and become a master coach at Grassroot Soccer.