The following is a Boston Herald article written by Bruce Lerch on September 2,  2010. Click here to read the original article. 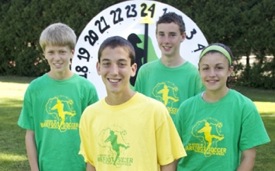 Wellesley High School sophomore Owen Diana is saying thank you and helping a lot of people at the same time this weekend.

The 15-year-old spent the summer working with his father, Peter, to organize 24 Hours of Barefoot Soccer to Prevent AIDS in Africa. The concept is simple: a 24-hour soccer game in which players will play barefoot to show solidarity with African children who can’t afford shoes, in support of Grassroots Soccer. According to the Grassroots Soccer Web site, 67 percent of the 33 million people worldwide that are infected with HIV live in Africa.

“We thought we would try something different by hosting a 24-hour game,” Peter Diana said. “It will be a true celebration of soccer, and we’re hopeful to raise some money for a great cause.”

While watching the 2006 World Cup, Owen Diana’s attention was caught by the team from the Ivory Coast. He began following the African players and leagues online and fell in love with their fast-paced style of play. This summer, he asked his father how he could do something to give back to the African players that he loved watching.

Diana enlisted help from fellow Wellesley High soccer players Lee Wickham and Ian Speers and their parents, and the 24-hour game came together. By Tuesday, nearly 150 people had signed up and more are expected.

“We want to make sure the event is taken in the right spirit,” Owen Diana said. “It’s not going to be a competitive thing, but is something we are doing to give something back and do our small part to help educate the African children about AIDS.”

People interested in playing or donating can visit www.24hoursofsoccer.com