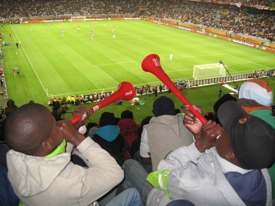 Not only did five Grassroot Soccer (GRS) Coaches get a chance to see the Uruguay v Ghana quarterfinal match at Johannesburg’s Soccer City stadium, but they also received a special invitation from FIFA President, Joseph (Sepp) Blatter, to join him before the game. The Coaches received tickets to the game through the Sony Ticket Fund, chaperoning participants in GRS Soweto’s Skillz Holiday programs.  Blatter personally invited them to his section to learn more about their experiences as Grassroot Soccer Coaches.

“I was extremely touched by these children who have endured so many struggles in their lives and given their very best to earn a ticket to a World Cup match through the Ticket Fund. Seeing them so excited just to be in the stadium, seeing them dancing and laughing was amazing – and I have to say from my heart, it deeply moved me. The spirit and attitude of these young people is truly inspirational.”

Through a partnership with Sony, an official World Cup sponsor, Grassroot Soccer received 15,000 tickets that were distributed to Skillz Holiday graduates as well as 59 partner organizations across the country.  The guiding principle of the Sony Ticket Fund is that tickets must be earned rather than bought. By demonstrating leadership in the fight against HIV, these graduates earned a seat in the stands at this first World Cup played on African soil.  Providing a once-in-a-lifetime experience for the 15,000 ticket recipients, it came as no surprise that Sepp Blatter wanted to join in the fun and experience the impact of the Ticket Fund for himself.

The Sony Ticket Fund also provided 25 Skillz graduates with the opportunity to serve as Official Flag-Bearers, carrying the FIFA flag onto the field during match openings in their home cities.  Selected by GRS Coaches during Skillz Holiday programs, these youth are role models in their communities. Silumgile, of Khayelitsha, is one such role model.  Read her story here.