GRS and J&J Host Girlz Got Skillz: A Young Women’s Summit on Health, Leadership, and Empowerment 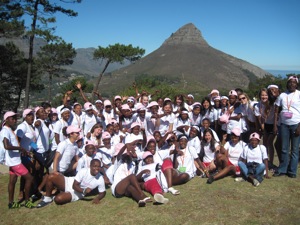 On Tuesday, April 6th, the girls toured around Cape Town, stopping on Signal Hill for a view of the city.

From April 5-10, 2010, Grassroot Soccer partnered with Johnson & Johnson and the Academy for Educational Development to host Girlz Got Skillz, an inspired, cross-cultural exchange program promoting girls’ empowerment, leadership, and healthy decision-making.  Bringing together 20 South African, 18 Namibian, and 11 American young women for a week in Kuils River, a community just outside of Cape Town, South Africa, the summit focused on opening dialogue, building relationships, and imparting confidence and self-esteem-all through soccer.  Led by GRS Cape Town’s female Coaches, the 49 young women, ages 14-19, participated in activities that initiated trust and dialogue, expanded their understanding of cultural differences and similarities, and built life-skills and self-confidence.  The event was made possible by Johnson & Johnson, a longtime supporter of HIV and AIDS prevention work, and a Grassroot Soccer partner in Northern Namibia.

The South African participants, hailing from the Cape Flats area of Cape Town, were selected by Grassroot Soccer and are new participants in GRS’ Skillz Street program. The Namibian girls were selected by AED for their demonstrated community leadership and will be a part of the new class of participants in AED Namibia’s Skillz program.  The American young women are active participants in the Washington, DC, and North Carolina chapters of Goals for Girls, an international initiative of girls helping girls through the game of soccer.  Each of the young women brought unique worldviews and talents to the week’s activities.

Throughout the week, professional female football players Danielle Slaton and Cindy Parlow of the USA, Fikile Sithole of South Africa, and Stacey Naris of Namibia, joined the participants.  The professional female players provided inspiration and mentorship while sharing their personal experiences in overcoming adversity.

Helen Zille, the Premier of the Western Cape, spent Saturday afternoon at the Girls Got Skillz Health Festival and explained that “the key thing that women have to know is that they can make choices that can empower or disempower them, and what the consequences of those choices are, and that in fact they can call the shots and not only be at the receiving end of the choices men make.”

In addition to completing GRS’ Skillz HIV prevention and education curriculum over the course of the week, the girls participated in a host of engaging, educational activities, including a Resiliency Race throughout Cape Town’s Central Business District, lunch with inspiring female community leaders at Impumelelo, a tour of Green Point Stadium, an intimate session with counselors from Mothers 2 Mothers, Skillz Café: a powerful roundtable talk about women’s issues, and a community walk through Khayelitsha where GRS Skillz coaches opened their homes to participants. The summit could not have taken place without the generous support from Johnson & Johnson, who’s local employees participated in the week-long event, including hosting a Beauty Night for the GGS participants and fielding a women’s football team to face off with GRS staff and coaches on the final day. The week concluded with a day of celebration, through a soccer tournament and health festival at the Football For Hope Centre, in Khayelitsha.

GRS Master Coach and football player Titie Plaatjie spent the entire week with the young women in Kuils River.  Reflecting on the young womens’ experience at Girlz Got Skillz, Titie stated “the socializing and participation had improved significantly by the end of the week, and as a result, group activities were executed through group effort.  As for the Coaches, it really impressed me how they connected with the participants, not only with those that were in their groups but with others that were in other groups.  By the end of the week, the girls’ confidence had grown significantly and they seemed ready to go back and become leaders for others, most of all, they were ready to challenge life and take things as they come.”

To view the Johnson & Johnson video about the week, click here. 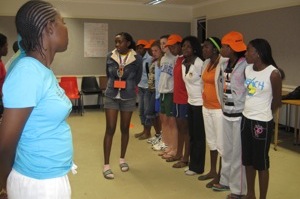 "Find the Ball," a GRS activity that teaches about stigma and descrimination, was one of the many activities of the week.

Girls from Namibia, South Africa, and the US hold up plates that they decorated during a nightime art activity.