Grassroot Soccer continues to make an impact on the lives of the youth who participate in our programs.  The following story from Skillz Coach Siyabonga “Glen” Mgwadlen, from Port Elizabeth, South Africa, captures the power of our programs to create positive change for both our Skillz Coaches and participants. 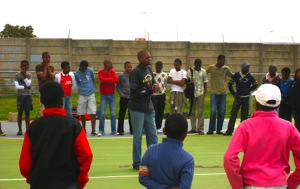 I’ll never forget our first intervention at W.B. Tshume Primary School in Zwide, Port Elizabeth in August 2009. Coaches Mendisto, Amy, Nkadi and I were working with sixth grade boys and girls. When we began, it was clear that some students did not want to participate. The down-turned faces, the curious glances and the hushed whispers all said the same thing: the kids were uncomfortable.  We learned later that they thought Grassroot Soccer was for little kids because they saw students just running around, and others did not want to participate because they knew we talk about HIV and AIDS and they feared being stigmatized.

The teacher at W.B. Tshume told us not to pressure those that did not want to participate and mentioned that several kids had personal/behavior problems. We felt like outsiders as we began to run Skillz practices with shy, reluctant kids. It was a monumental challenge. Some kids were absent for days at a time. It was difficult to tell if we were reaching anyone with our messages. One 17 year-old girl named Ntombi[1] always caught my eye. She would just sit in the back, never speaking or participating in games. She was often absent too. When we did Team Talk she did not even look or listen to the other kids in her group. I feared that we were not reaching her and that we were letting her down.

The turning point of the intervention came during Practice 8, the final Skillz practice, which features an activity called “My Coach’s Story.” During the activity, we asked volunteers to come to the front of the class and share an experience that challenged them and explain how they triumphed in the face of adversity. “Volunteers only,” we repeated. There would be no pressure to perform. A young boy, one of our most enthusiastic participants, was the first to step forward. When his story concluded, he sat down, leaving the stage for a new presenter. As silence descended upon the room, I scanned the classroom for signs of life.  No one could have predicted what happened next.

In the back corner of the room sat Ntombi, who had not spoken all week. Without lifting her gaze, she quietly got up from her chair and walked slowly down the aisle toward the front of the class. Her quiet confidence mirrored the class’s stunned silence.

In a soft but steady voice, she told the group that her mother was HIV positive and had been bedridden at Dora Nginza Hospital for the past six months. Because her mother had fallen ill, she had moved in with her aunt. But rather than love and support, Ntombi was met with scorn and disapproval. Ashamed of her sister’s “condition,” her aunt was determined to take it out on her young niece. She gained confidence with every word and slowly gained the courage to confess something she had never shared with anyone before.

In May 2009, one day after school, Ntombi went to Greenacres Mall with her brother’s friend. On the way back, he raped her. Despite the fear and pain that consumed her, Ntombi knew what she had to do.  Ntombi went to the Dora Nginza Rape Crisis Centre, where one of the diagnostics is an HIV test.  There she learned that she had, indeed, been infected with HIV.  Shocked and confused, she didn’t know how to handle the situation. Without a strong support base at home, she chose to run away to live with a friend in Motherwell.  This was why she had missed so many school days.

She didn’t have anyone. There was no one to protect her and no one to turn to. Although weakened by the experience, she was not broken. She still had the courage to confide in us, her Grassroot Soccer Coaches and fellow participants, to seek help from those who cared for her. She told us her story, and we connected her with the Ubuntu Education Fund, a long-standing partner of GRS that provides long-term counseling and support for youth in Port Elizabeth.

It has been four months since we completed our first intervention at W.B. Tshume Primary School.  Ntombi is now attending counseling and is ready to disclose her status to her mother and her aunt. She said that things are much better in her life after sharing and telling other people about her story.

This year, when we went to her school, she was friendly and open and shared with us that she really liked the My Coach’s Story activity because she got to share what she was feeling inside. Now she is working toward the completion of grade seven. This time, when we were doing Team Talk, Ntombi told her friends the story of being raped by her brother’s friend. “Be careful,” she warned, “because even if people know you and offer you things you should not completely trust them.” She also participated in Risk Field and talked to the class about the danger of sugar daddies. Ntombi’s transformation from shy and reclusive to a classroom leader demonstrates the impact our program can have.

Now when we head to W.B. Tshume, students ask us to come early so they can tell us about their friends who also need help accessing counseling services, HIV testing, and rape victim support. These were the same students who wouldn’t even talk to us before, and now they are open to share and even help recruit kids for Grassroot Soccer programs. I am proud that, since 2006, our team in Port Elizabeth has touched the lives of more than 7000 youth like Ntombi.  With enduring support from donors, partners, and friends of Grassroot Soccer, we will continue to grow and expand our impact on the lives of South African youth.

This story was selected by GRS Coaches in Port Elizabeth using the Most Significant Change method of qualitative data collection, in which Coaches share stories with the group in response to a particular question/theme and vote on the story demonstrating the most significant impact.  This story was told by Grassroot Soccer Skillz Coach Siyabonga Glen Mgwadleni to GRS Intern Michael Zales, who wrote the story with editorial support from GRS Intern Alex Afsahi.

[1] Name has been changed for the sake of confidentiality