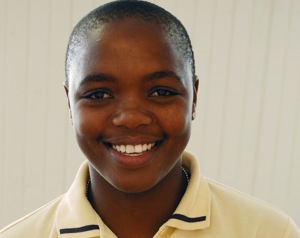 Nolusindiso ‘Titie’ Plaatjie, of Port Elizabeth, South Africa, has recently been featured in the book ELEVEN: Making Lives Better, 11 Stories of Development Through Football.  Written by Steve Fleming, co-founder of GRS Implementing Partner Kick4Life, and co-edited by streetfootballworld, the book tells stories of eleven extraordinary individuals, each of whom has been transformed by the power of football in their lives.  It further explores the work of the eleven organizations, from Cambodia, to Columbia, to South Africa, that enabled these transformations.  Through these case studies, ELEVEN proposes that “the beginnings of a new phase in the game’s evolutionary journey are already underway – football as a tool for social development – as more and more communities and individual lives are transformed through the power and influence of the sport.”

Titie, who features as the final case study in the book, is the ultimate Grassroot Soccer role model – a symbol of inspiration to all who know and work with her.

Born in Peddie, a small town in South Africa’s Eastern Cape, Titie moved to Port Elizabeth (PE) when she was just five years old. In the early 1990s, Port Elizabeth and the Eastern Cape were hot spots for HIV, poverty, and crime, and Titie’s family didn’t have the resources to escape these challenges.  Despite her impoverished upbringing, Titie focused her time and energy on football, which gave her the strength and focus to make positive life choices.  As she grew older, football became a defining feature in her life,  and she was named captain of City Lads, a local women’s team in Port Elizabeth.  Titie’s success at school saw her progress to the Nelson Mandela Metropolitan University, but without sufficient funding, she was unable to complete her degree and had to drop out.

It was at this point in her life that Titie found GRS.  In February 2007, GRS visited City Lads to recruit Coaches for our program.  Titie signed up immediately and quickly showed great skill as a facilitator and role model for youth.  In time, Titie was hired as a Program Coordinator for GRS PE, and was promoted as a Master Coach just last month.  With support from GRS and tremendous dedication, Titie is also back in school and on her way to earning a degree in Human Movement Science.

You can also see “A Game For Life,” a documentary of Titie’s work in Port Elizabeth.