The Revolution’s Chris Tierney Spends His Off-Season With GRS 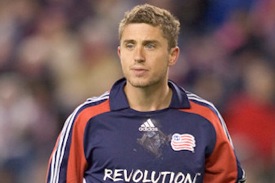 Chris Tierney is in his third year playing left midfield for the New England Revolution.

Chris Tierney, a wide left midfielder for the New England Revolution, spent a month of his off season not vacationing with friends and family, but volunteering for HIV/AIDS outreach with Grassroot Soccer in South Africa.

Tierney is 24 and heading into his third season with the Revolution. The Massachusetts native graduated from the University of Virginia with a Bachelors degree in psychology and was spotted by the Revolution in the 2008 invitation-only tryout and drafted in the Supplemental Draft the following day.

He traveled to South Africa alone and joined a group of ten interns who have volunteered a year of their time, unpaid, to Grassroot Soccer. GRS has offices throughout Africa and Tierney was the only MLS player involved over the winter break.

To read the full article and the interview with Chris Tierney, click here.

I don’t care about your name, I just want to see you dance!