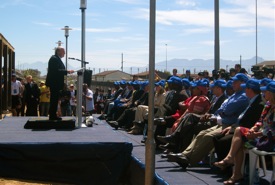 On Saturday, December 5, a day after the 2010 FIFA World Cup Final Draw, the eyes of the global soccer community were on the opening of the world’s first Football for Hope Centre, in Khayelitsha, South Africa, the culmination of a yearlong collaboration involving the Football for Hope movement, Grassroot Soccer, the Khayelitsha Development Forum, and numerous supporters and funders. The opening signified day one of a lasting partnership through which Grassroot Soccer, the Centre Host, will engage the youth of Khayelitsha and provide them with essential HIV prevention education. More about the opening, as well as Grassroot Soccer’s involvement and legacy of HIV education and prevention in Africa, can be found in some of the media coverage [here] and [here], which so far has included Associated Press, Reuters, and CNN International.

The Centre in Khayelitsha is the first of 20 that will be built in disadvantaged communities across Africa as part of Football for Hope’s 20 Centres for 2010, the Official Campaign of the 2010 FIFA World Cup. Football for Hope is a movement led by FIFA and the football-for-development network, streetfootballworld, of which Grassroot Soccer is a longtime implementing partner.

The Centre has rooms for educational activities and community gatherings, public health services, office space, and an artificial turf field, where Grassroot Soccer will run HIV and AIDS prevention education for youth.  It also includes several all-purpose rooms, for private counseling and testing. A Grassroot Soccer Skillz coach will be staffed on site at all times.

In his remarks, Blatter stressed the goals of the 20 Centres for 2010 campaign, and in so doing illustrated why Grassroot Soccer was a natural choice for the first Centre Host. “These Football for Hope Centres will use the power of football to address social challenges,” he said. “Each will provide a platform for organisations that use the game to address social issues such as children’s rights and education, health, HIV and Aids and the environment, and will leave a legacy for Africa that will last long after the final whistle of the 2010 FIFA World Cup”.

After a plaque unveiling and ribbon-cutting, during which Grassroot Soccer co-founder and Managing Director Kirk Friedrich joined the other dignitaries on stage, an on-field demonstration of the Grassroot Soccer Skillz activity “Risk Field,” led by Skillz coaches, brought to life for all those in attendance how soccer can be used to teach kids about the most dangerous behaviors that lead to HIV transmission. Even Radebe got in on the action for the enthralled audience.

The Centre opening, and two-day international youth tournament that followed, closed out more than a week of intense preparation and activity at the new site, located on land once notorious for crime and violence. Earlier in the week, Grassroot Soccer hosted a VCT (Voluntary Counseling & Testing) tournament, an innovative model which connects youth and community members to essential health services, enabling them to test for HIV and know their status, in the context of a soccer tournament. The VCT tournament at the new Centre drew 102 young men and women who learned their HIV status and was the first of many exciting activities to come at the site.

“This was more like a crime spot, but now it is more like an activity spot where people come to enjoy themselves” said Zamayedwa Sogayise, Chairperson of the Khayelitsha Development Forum. The Forum, along with the City of Cape Town, had applied for the site to be considered for a Football for Hope Centre, and were instrumental in Grassroot Soccer’s selection.

The first six Football for Hope Centres will be constructed in South Africa, Namibia, Kenya, Ghana, Mali and Rwanda.