Seeing teammates die of AIDS convinced me to do something to stop spread of HIV, says goalie Tommy Clark 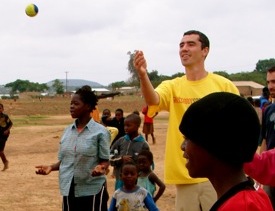 WITH 30,000 chanting Africans cheering him on,Tommy Clark stepped off the bench and took to the field at the Babourfields Stadium in Buloweyo, Zimbabwe.

The young Scots-born footballer, son of legendary Aberdeen goalie Bobby, had never felt so nervous but hoped to impress as he made his first appearance for local side Highlanders FC.

But despite a a promising debut, Tommy never went on to make much of an impact at the club, although the players and fans made such an impact on him that he has gone on to spend his entire career working to save lives in their name.

A few years after he first lined up alongside them, he discovered that half of the Highlanders midfield he played in had been killed by the AIDS epidemic which burned through the first team and huge sections of the loyal fan base.

That news inspired him to found the internationally acclaimed charity Grassroots Soccer, which uses football to educate young Africans about the dangers of HIV/AIDS.

Supported by the likes of Bill Gates, Nike, Ford, the United Nations and the American federal government, in the last seven years Grassroots Soccer has educated more than 300,000 kids in 15 countries, and has become one of the most successful non-governmental organisations in the developing world.

Tommy, 38, who was born in Aberdeen but now lives near the company head office in Vermont, is delighted that he is making an important contribution to football through the charity.

“When I was living and playing in Zimbabwe, HIV and AIDS was a big problem but I don’t think I had one chat about it the entire time I was there,” he said.

“I was there for one season, but nobody talked about it at all. But a few years later I was at medical school and doing my residency in Albuquerque, New Mexico, and had a few friends who knew people in Zimbabwe.

“And suddenly, we realised that within a period of two to three years, a lot of people we knew were dying. And it was footballers who had nothing seemingly wrong with them, but they were all just dying suddenly of AIDS.

“There were guys who played for the national team and out of the three other centre midfielders I played with at Highlanders, two had died.

“I was particularly affected by the death of a friend called Mackay Nyathi, who was a very talented player, much better than me. He was a lovely guy, very educated, all round nice guy, and then he died.

“We all realised that this was affecting so many people and we decided to do something. We had no idea what, but we knew how popular and powerful football was and that we wanted to use that to start an education programme.”

Tommy and his friends enlisted the help of US reality TV star Ethan Zohn, who ploughed some of the winnings from the programme Survivor into the project and, by the end of April 2002, Grassroots Soccer was recruiting local football stars across Africa to help implement their HIV/AIDS curriculum.

The scheme, rolled out to 13 countries in Africa and two in Central America, involves football stars delivering and endorsing crucial lessons in AIDS and HIV prevention, encouraging safe sex, common sense regarding the number and overlap of sexual partners and helping remove the stigma and misconceptions about HIV.

Since the founding of the organisation, it has gone on to attract some high profile backers, including Microsoft billionaire Bill Gates, and has also delivered some incredible results.

Tommy, now the CEO of the organisation, loves being able to help make a difference in the country that he and his family grew to love.

He got his first exposure to life in Africa when he was 13 and dad Bobby, fresh from picking up a league winner’s medal with Alex Ferguson’s Aberdeen, moved to Buloweyo to coach Highlanders.

Tommy played with the school team and made many friends before the increasing Mugabe-led political unrest of the early Eighties forced them to leave.

The next stop for the family was Dartmouth College in New Hampshire, where dad Bobby coached and Tommy studied.

Once he graduated, Tommy, who had also had trials at Celtic as a teenager, got his move back to Zimbabwe, where he developed an even stronger connection with the perennially crisis-hit state. After his season with Highlanders, Tommy enjoyed a short spell playing in New Zealand before studying to become a doctor in the US, and founding Grassroots.

Now a qualified pediatrician, Dr Clark loves the fact that his charity means he is still involved with the sport which has been such a big part of his life.

“When I started medical school, I thought that was it for me and football,” he said. “But it has come back round for me. After seeing how important soccer is to so many people, especially in Africa, it makes sense to work within it.

“When we talked about starting a charity back in 2001, a behavioural expert told us that the best way to change attitudes is by using role models and, in Africa, that means footballers.

“We had no idea how to raise money or set up a non-profit organisation, but we got a lot of advice.

“I now go to Africa two or three times a year. But one of the best things we did was partner with local organisations. We now have 25 different partners in 15 countries, and that’s how it has moved on.

“We help dispel misconceptions – all sorts of things that in Scotland might not be considered risky behaviour but in the context of Africa would be.”

And Tommy admits he couldn’t be happier with what he is doing.

He said: “I thought this was just a project to do while I completed my residency. I had no idea this would become my career and be so successful.

“I’m just happy to be doing what I can to help, but it blows my mind sometimes when I stop to think about it.

“We need to work towards harnessing the global power of football, and using it to end HIV. It’s having high aspirations that keeps you working hard.”

For more information, or to donate, checkout grassrootsoccer.org

Article written by Brian McIver,  published in the Scottish Daily Record on the 16th of November, 2009.