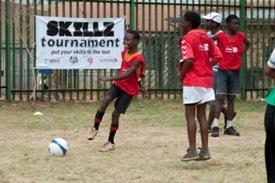 Castrol’s partnership with Grassroot Soccer got off to a flying start yesterday with local football legends pledging their support for the programme while attending an action-packed launch event at Lekang Primary School in Soweto. The partnership between the two organisations has enabled the roll-out of the Castrol Skillz Holiday Programme which uses football as a platform to enhance HIV/Aids awareness amongst young people between the ages of 10 and 14.

Over one hundred youths from all over Soweto are taking part in the programme which runs for five days, ending on Friday. Through interactive soccer drills the sessions engage and educate young learners while keeping them entertained during the school holidays. Through the holiday camps running this week, the Castrol Skillz Holiday Programme is touching some 1000 children across South Africa at camps running in townships in Kimberley, Port Elizabeth and Cape Town.

Former Bafana-Bafana players Pollen Ndlanya, Edward Matale and former Manchester United player, Gary Bailey, were amongst the guests who attended the launch together with local councilors, South African Football Association and FIFA representatives and Castrol staff.  “Ahead of most sporting codes, football leads in its universal appeal to all age groups, across all races and across all continents. This makes it an ideal platform for companies like Castrol to embrace it and use it to drive sustainable social change in our country,” says Bailey, who is also a 2010 FIFA World Cup South Africa™ ambassador for Castrol.

Guests attending the launch were treated to a key note speech by Bailey, who highlighted how important it was for companies involved in the 2010 FIFA World Cup South Africa™ to implement sustainable social responsibility initiatives. “Once the last whistle blows it is important for companies to leave behind a lasting legacy that will stand to benefit South African communities in a sustainable way,” commented Bailey.

The highlight of the proceedings was definitely when all the guests actively participated in one of the Skillz sessions on the school’s field. “I loved every minute of it. You could see the children were thoroughly enjoying it and the coaches held their attention throughout the exercise. It was amazing to actually see how key messages around HIV/Aids were threaded into the activities, providing the children with a novel way of learning about HIV/Aids,” says Bridget Nkuna, Corporate Social Investment Manager at Castrol.

Further Castrol Skillz Holiday Programmes will also be taking place during the extended public school holiday period that has been confirmed to run concurrently with the 2010 World Cup tournament activity.

“The 2010 FIFA World Cup South Africa™ is an exciting time for the whole nation but it will also be a demanding time as South Africans still have to contribute towards the economy while taking care of a family. Through the Castrol Skillz Holiday Programme, we hope to provide some welcome relief for parents who can still continuing working, knowing that their children are safe and are being entertained and educated during the holidays,” says Nkuna. 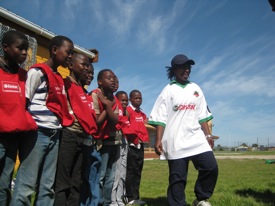 The programme feeds into the FIFA Football for Hope movement, which is a strategic alliance, led by FIFA and streetfootballworld to bring together programmes aimed at children and young people using football as an instrument to promote participation and dialogue.

“Football is a great tool for breaking down social barriers, and with the increased interest and excitement of the World Cup, it has become the ideal vessel for getting a message across,” says Nkuna. “Through our partnership with Grassroot Soccer, we feel that we have identified the perfect opportunity to empower the youth with positive, self-affirming life skills information that will serve them well into the future.”

A Record Number Of HIV Tests In Malawi