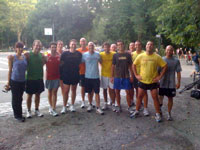 The Grassroot Soccer Marathon Team is training hard for the NYC Marathon on November 1st, 2009, check out the photo of their recent training run in Central Park. The GRS team recently featured in a news release by the ING New York City Marathon, which can be read below.

We have a total of 40 runners representing 13 states. Our newest member is Stephen Gaughen who is in the Marine Corps, currently stationed in Afghanistan. Stephen is running in the 1st annual Afghanistan- Marine Corps marathon on October 25th and is excited to support GRS. His training involves a run every morning and every night along the flight line because it’s the only paved roads they have, while also doing sprints in the sand. A Big “Kilo” for Stephen.

Each team member is working hard to raise money to support Grassroot Soccer, and appreciates your pledges. To check out our team, and make a donation to the cause, please visit grassrootsoccer.org/marathon.

New York, August 13, 2009—Grassroot Soccer (GRS), an international non-profit organization that uses the power of soccer to provide African youth with the knowledge and life skills necessary to live HIV-free, announced today that it will field an all-star team of runners to compete in the ING New York City Marathon on Sunday, November 1. This is the first year the GRS Marathon Team grassrootsoccer.org/marathon will participate in the official marathon charity program.
“Grassroot Soccer is honored to bring together such a great group of runners and to be able to use the ING New York City Marathon to unite all of them around the common cause of fighting HIV/AIDS,” said Ethan Zohn, the GRS co-founder and Survivor: Africa winner. For more about Ethan and the GRS Marathon Team check out this video on People.com
GRS’s celebrity team includes American actor Scott Wolf, Canadian actor Donal Logue, Pitchmen host Anthony Sullivan, Amazing Race 1 winner Brennan Swain, Bachelorette winner Ryan Sutter, Survivor alumni Ian Rosenberger and Chad Crittenden, (RED) International CEO Seb Bishop, and Major League Soccer executive Neel Shah.
“Grassroot Soccer is exactly the kind of ground-level organization that can help slow and eventually stop the spread of AIDS among young people in Africa,” said Wolf, who ran the ING New York City Marathon in 2003.
The star-studded team will raise money to support the organization’s goal of putting 1.25 million African youth through the GRS program by the time of the 2010 World Cup, which will be held in South Africa. The program uses soccer to create an HIV and AIDS life-skills curriculum. To date, more than 280,000 children have graduated from GRS’s programs.
“It’s a natural fit for Grassroot Soccer to be aligned with the marathon because of a shared commitment to using sport to help kids lead healthier and fitter lives,” said Mary Wittenberg, New York Road Runners president and CEO and race director for the ING New York City Marathon. “Running is a key part of both our missions, and we welcome them to our group of partners. This team’s star power certainly ups the ante in combining fun and fund-raising.”
A field of more than 40,000 is expected to participate in the 40th running of the ING New York City Marathon; this would be the largest in the storied history of the race. The Marathon is a vehicle for change for the more than 80 non-profits that comprise the official charitable runner program, through which runners can raise funds and gain awareness for a wide array of causes. This year, more than 6,800 runners aim to collectively raise an all-time high of $21 million.
About Grassroot Soccer
Founded by former professional soccer players in 2002, Grassroot Soccer (GRS) trains African soccer stars, coaches, teachers, and peer educators in the world’s most HIV-affected countries to deliver an interactive HIV prevention and life skills curriculum to youth. Translating research into action and leveraging the excitement around the 2010 World Cup, GRS attracts and engages young people through schools, community outreach, and social multimedia (e.g. magazines and TV). GRS has educated more than 270,000 kids via its ‘Skillz’ curriculum, and is a leader in the sport for development movement. For more information on the GRS Marathon Team or to make a donation, visit grassrootsoccer.org/marathon.
About New York Road Runners
New York Road Runners, founded in 1958, is dedicated to promoting the sport of distance running, enhancing health and fitness for all, and responding to community needs. Our road races and other fitness programs draw upwards of 300,000 runners annually, and together with our magazine and website support and promote professional and recreational running. A staff of more than 100, assisted by thousands of volunteers, stages the ING New York City Marathon, as well as a road race nearly every weekend plus many track and cross country events. NYRR’s home base in New York, and its lifelong identification with Central Park, have given many of its events iconic status, attracting the world’s top professional runners. Our youth programs provide running to nearly 100,000 schoolchildren in New York City, around the country, and in South Africa who would otherwise have few or no fitness opportunities. For more information visit www.nyrr.org .
About the ING New York City Marathon
Celebrating its 40th running in 2009, the ING New York City Marathon is one of the world’s great road races and the premier event of New York Road Runners, drawing more than 100,000 applicants annually. Since the inception of the official charity program in 2006, more than 13,600 runners have raised nearly $50 million. As any one of the nearly 788,000 past participants will attest, crossing the finish line in Central Park is one of the great thrills of a lifetime. For more information, visit www.ingnycmarathon.org .