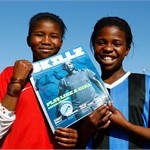 As South Africa prepares to celebrate National Woman’s Day on 9 August, the voices of girl power could already be heard this afternoon at the Ncomu Road Urban Park in Khayelitsha as a girls-only football tournament took place in front of the construction site of the first of 20 Football for Hope community centres that are to be built across Africa in conjunction with the 2010 FIFA World Cup South Africa™. Construction efforts here kicked off some ten weeks ago with a groundbreaking ceremony on 25 May, 2009.

“Tomorrow let’s play football, but today let us support our girls,” exclaimed Coach Azola as he addressed the 30 wide-eyed boys who sat on the sidelines and watched the all-girl teams take to the field in brightly coloured football jerseys. The boys responded to the Grassroot Soccer coach with four short, hard claps followed by a loud “Amanina, woooo!” (Women, woooo!). The clapping and chanting rang out across the park, as onlookers smiled. Azola was one of many coaches and young leaders assembled to host the girls-only football tournament in honour of National Woman’s Day.

A joint effort
Grassroot Soccer, Amandla Kulucha (which means ‘strength to youth’) and FIFA joined forces to help run the small football tournament. The event was the first joint venture between Grassroot Soccer and Amandla Kulucha, who are both members of the streetfootballworld network, FIFA’s partner in the “20 Centres for 2010” project.

Today, the feminine footballers had to make do with a stony, makeshift street football court and a small grass field, but by December 2009 the park will house the first completed Football for Hope Centre, accompanied by a five-a-side, artificial football pitch.

As Paola Peacock Friedrich, the FIFA Programme Development Manager for the ’20 Centres for 2010′ initiative explained: “The FIFA World Cup may be the ultimate showcase for football, but we believe it is also a showcase for the incredible community work being done by FIFA and its partners.”

She’s got Skillz
Competing teams rotated between playing knockout football matches and participating in 45-minute ‘Skillz’ sessions. Developed by Grassroot Soccer, the Skillz programme uses football as a means to help educate children on HIV/AIDS and also provide them with the tools necessary to overcome the social challenges they face in impoverished communities. The Grassroots curriculum has been implemented to great effect in a number of African countries including Zambia, Zimbabwe and South Africa.

“Most of these kids have never even experienced something as simple and important as being praised for their unique strengths and good qualities,” said Friedrich, as girls from both teams formed a circle at the end of a match. “These activities lead to the opportunity to engage with kids and begin a meaningful conversation.”

As the Football For Hope campaign continues in South Africa, so do preparations for next year’s FIFA World Cup, and if the excitement, competitiveness and fiery enthusiasm shown by the girls here today is any indication of what to expect, visitors to South Africa are in for a truly life-changing experience.