An inspiring story of how a past GRS intern in South Africa has united varsity athletes at Georgetown and leveraged the GRS model in an effort to stem the raging HIV epidemic in Washington D.C. 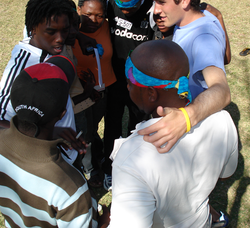 While teaching D.C. middle schoolers about the effects of HIV/AIDS, varsity athletes gather the students into a game scenario — one student is encircled by other people holding balls to represent a different kind of disease. At first a second student, labeled the immune system, protects the person in the middle and blocks the balls when they are thrown toward the individual in the center of the circle. But the coaches then take away the immune system, creating a scenario whereby the person in the middle has HIV/AIDS.
This game, called HIV Attacks, is one of many efforts by Grassroot Hoyas, a new Georgetown group comprised of varsity athletes aimed at helping teach D.C. inner city youth about the severe HIV/AIDS epidemic affecting the nation’s capital.
Grassroot Hoyas began in January after months of preparation, numerous setbacks and many sleepless nights, when Tyler Spencer (GRD ’09) gathered 40 Georgetown athletes from a variety of varsity teams for the intensive training program to become a Grassroot Hoyas coach.
Spencer said that he focused on athletes because they often do not get the opportunity to take part in long-term community service activities because of time limitations due to sports practices.
“As Division I athletes we have major demands on our time. A lot of athletes never get the chance to study abroad or do long-term service work … not because we don’t want to, but because it’s hard to find a program out there that fits with our other commitments,” Spencer said.
“Through Grassroot Hoyas, athletes are able to use a medium — sports — that they care about to reach kids in a powerful way, right in our backyard. Whether they end up going pro, going to Wall Street or to law or med school, the hope is that by being a coach in the program they will become more conscious of public health, education and other social issues.”
Spencer added that kids look up to athletes.

“Division I college athletes have an enormous potential to serve as positive role models to local youth. Our mission is to use sports as a vehicle for social change,” the Grassroot Hoyas coach’s guide stated.

Since entering Georgetown for graduate school in fall 2008, Spencer has been working to get Grassroot Hoyas on its feet. After having met with the Georgetown University Student-Athlete Advisory Committee and contacting various sources for funding, Spencer was not making much progress and decided the best way to jumpstart the project would be to have a group behind him.

He began to spread the word about Grassroot Hoyas, set a deadline for commitments and scheduled the training course for the first two weekends after winter break. Although Spencer had predicted an attendance of about 10 to 15 student athletes for the training program, he said he was surprised at the turnout of 40 students.

Over the course of the semester, Grassroot Hoyas has gained recognition, most recently with an appearance on CBS News on Logo — a television program that has a viewership of about one million people. The three-minute snapshot showcases some of the Grassroot Hoyas’ coaches during an after-school program.

“It’s good to see all of our hard work pay off, and we’re really hoping that this media attention will help us in the future to gain support, both financially and in terms of participation,” Spencer said.

Spencer, who is a member of the men’s heavyweight rowing team at Georgetown, first conceived the idea of linking sports with community service in 2006 after taking part in a program called Bike and Build, which raised money for Hurricane Katrina victims by biking across the U.S.

Spencer then learned about Grassroot Soccer, an international organization that uses soccer to provide African youth with knowledge, life skills and support to live HIV-free.

According to its Web site, Grassroot Soccer aims to “put 1.25 million African youth through the GRS program by the end of 2010 and leave a lasting legacy in southern Africa.”

From 2007 to 2008, Spencer took an active role in Grassroot Soccer and along with three other people, established the De Beers branch of the organization in a town bordering South Africa and Zimbabwe called Musina.

Spencer said his experience with Grassroot Soccer led him to the idea of creating a pilot program of this organization in D.C., which has the highest rate of new AIDS cases of any major city in the U.S. — a recent epidemiology report conducted by The George Washington School of Public Health and Health Services found that at least 3 percent of D.C. residents have HIV/AIDS, a percentage that exceeds the 1 percent threshold that indicates a “generalized and severe” epidemic.

“I saw this as the perfect opportunity to launch this project in D.C.,” Spencer said.

“Although [Grassroot Soccer] currently focuses on programs in sub-Saharan Africa, the need to address the issue of HIV/AIDS domestically cannot be ignored.”

“The kids look up to us, and I think a lot of the time the potential varsity student athletes have to help in this way is untapped,” Grassroot Hoyas Coach Jackie DesJardin (COL ’11), a varsity soccer goalie, said.

“The first day was a little overwhelming, but it has improved significantly since, and I now know a lot of the kids by name. It’s very interesting to see the progression of the kids towards understanding more why we’re there and being more open to us.”
Grassroot Hoyas currently works with two D.C. public middle schools — Francis Stevens Educational Campus and Browne Gibbs Young Educational Campus — on different days of the week in after-school programs that typically last one and a half hours. The target age group is fifth through eighth graders, but the Grassroots Hoyas work mostly with seventh-grade students.

The D.C. public school system is the third worst performing school system in the country, and Spencer noted that the struggling system has contributed to the challenge of starting up Grassroot Hoyas in schools. To work effectively with students of this age group, Grassroot Hoyas makes use of a simple model developed by Grassroot Soccer, which uses sports as a means of educating students. Spencer spent the fall semester redesigning the program to suit the D.C. context.

“Many of the adolescents that we work with have very little or no sexual education. Grassroot Hoyas aims to raise the awareness of these students through sports, which creates an exciting setting to learn,” Andrew Federer (COL ’10), a Grassroot Hoyas coach and heavyweight crew team member, said. “Our main purpose is to use our role model status to teach HIV/AIDS awareness to at-risk youth in D.C., where the infection rate is the highest in the country.”

With 40 student athletes involved, Grassroot Hoyas has gained recognition and support since January. After pitching his idea to Grassroot Soccer, Spencer was given $800 for the training program and has since received support from Nike after entering an online competition called Changemakers.

In conjunction with Grassroot Hoyas, four students from the School of Nursing and Health Studies are conducting a study to monitor and evaluate the effects of the program on the students and coaches involved. On the first day of the program, each of the students was asked to fill out a questionnaire about HIV/AIDS, and the same questionnaire will be administered on the final day so as to observe statistically how much the children have learned from the program. In addition, the nursing students will interview the Grassroot Hoyas’ coaches after the conclusion of the program this semester to evaluate how they have been affected.