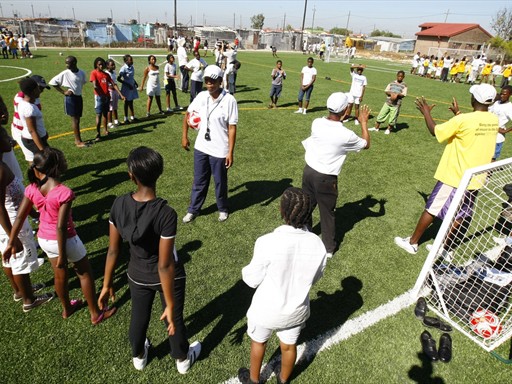 It is a scorching summer’s day and FIFA Chief Medical Officer, Professor Jiri Dvorak, is lying on a field doing push-ups among some 150 excited seventh grade school kids. The compact field, with its bright green artificial turf, neatly painted sidelines and gleaming white goals, is pressed up against a school building and straddled tightly on the remaining three sides by tin-shacks, abandoned cars and curious onlookers. “Respect. Participate. Share,” a group of children yell from the centre of the pitch, spirits high and smiles wide.

The Chris Campbell Memorial field at Ikusi Primary School is a small slice of recently-opened football heaven, located somewhere inside the maze of dirt roads and shacks that make up the Khayelitsha township on the outskirts of Cape Town. Doctors, scientists, charitable organizations, coaches, teachers and schoolchildren converged on the field on 25 February to celebrate the very first coaching session of the ’11 for Health in Africa’ campaign.

’11 for Health’ potential is without limit
Following the success of ’11+’ (an injury prevention program developed by FIFA’s Medical  Assessment and Research Centre (F-MARC) that has been proven to prevent severe sports injuries by up to 50 per cent and general injuries by one third), F-MARC have developed  an ’11 for Health’ programme based on the same strategy: breaking down the complexities of injury prevention, or in this case communicable and non-communicable diseases, into 11 simple, easily memorable points. Ideally, the ’11+’ injury prevention program and ’11 for Health’ would work together, in order to harness the full potential of using football to promote health.

Entrusted with the task of helping to develop and carry out the ’11 for Health in Africa’ curriculum is Grassroot Soccer, a non-profit organization powered by some rather football-mad, socially conscious and bright young people. Grassroot Soccer have been using the power of football to battle HIV and AIDS in a number of African countries since 2002, and their work clearly impressed F-MARC, who were eager to find a local partner with the reach and community credentials needed to carry out such an important programme.

The ’11 For Health’ lessons seem simple, but there is clearly an effective learning process at work. AIDS awareness, malaria prevention, respect for women and girls, avoiding alcohol and substance abuse, and basic hygiene were just some of the messages quickly absorbed by the young participants.

Pilot study takes off
The official ’11 for Health’ pilot study, launched on 2 March, at Intshayelelo and Chuma primary schools in Khayelitsha. Once the courses have been completed, the results with regard to the children’s awareness and attitudes towards preventive behaviour and health will be assessed. From there, the possibilities are limitless. As Professor Dvorak told the kids before ending the session: “You are the beginning of a large project, serving as an example for thousands around the world.”

As the kids quietly filtered back to class, Grassroot Soccer intern Ryan McGonigle watched from the sidelines with a smile. Ryan is currently entrusted by Franklin & Marshall College (USA) with ensuring that the newly donated football field is maintained and put to the best possible use for the local community.

The session was a quiet victory for Ryan and his friends back at Franklin & Marshall, who donated the field to commemorate deceased friend Chris Campbell, who passed away just before touring South Africa with his football team. The event exemplified what they had envisioned in honouring their friend: hope coming to Khayelitsha, on a football field, despite being surrounded by some of Africa’s harshest realities.