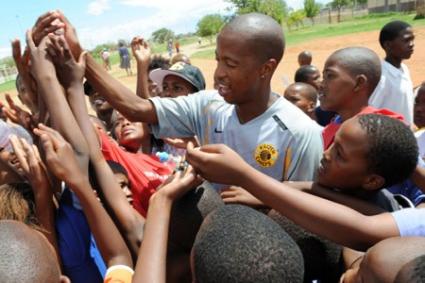 A number of South African sports stars, including Kaizer Chiefs captain Jimmy Tau, attended events in Port Elizabeth and Kimberly this weekend to acknowledge World Aids Day on December 1.
The sportsmen helped raise awareness of HIV/AIDS and motivated the people who gathered at the two events to get tested for HIV. They did this on behalf of a Cape Town-based HIV educational NGO, Grassroots Soccer, who held tournaments at the different venues.
The two tournaments not only pitted teams against each other on the pitch, but also encouraged teams to partake in HIV prevention activities and to get tested throughout the day to earn additional points for their team towards the overall table.
The events also served to promote the launch of “Football for an HIV-Free Generation”, a new partnership which strives to capitalise on the excitement surrounding the 2010 FIFA World Cup by using sport to fight HIV/AIDS in Africa.