HIV Testing Gets a Kick Out of Soccer 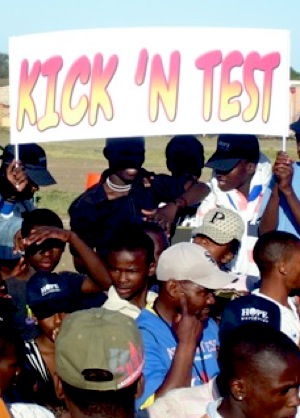 In a bid to encourage young people to know their HIV status, the second annual Kick ‘n Test soccer tournament will be held at Port Elizabeth‘s Zwide Stadium on Saturday. Eight Zwide and Kwazakhele high schools will each field two teams competing for the trophy, take part in educational activities and get tested for HIV/Aids to earn points.

Organiser Kellan Florio, of Grassroot Soccer, said the event aimed “to use the power of football as a tool to bring the youth together, increase awareness about HIV testing and treatment services and empower them to know their status by promoting positive peer pressure.”

Saturday‘s event will take place between 8.30am and 5pm and Bay United players and staff are scheduled to make an appearance.
Florio said entertainment would be provided by a DJ, while those attending would be allowed to participate in the fun and educational activities, attend voluntary counselling and get tested at any time during the day.
Masibambane High School were last year‘s tournament champions.
There will also be dance competitions with prizes.

GRS and FHI Takes the Field in Tanzania