Kicking AIDS to the Sidelines 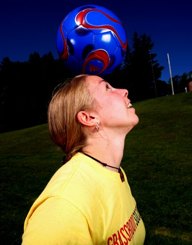 A 2008 Truman Scholar and Director of Grassroot Soccer’s Lose The Shoes Campaign, Brooke Rosenbauer is combining her passions for sports and health and has helped raise over $100,000 for GRS since 2006. After she graduates in May, she plans to work for GRS as a Field intern in South Africa. Brooke was recently profiled by the Brandeis University Catalyst.

(Click here to see a video of Brooke’s story)
Former Brandeis varsity soccer player Brooke Rosenbauer ’09 knows ﬁ rsthand about the power of sports to heal. After a serious car accident last spring, she faced a long road to recovery. But she took it in stride. “When you’re an athlete, being injured is just part of the game,” says the Vermont native philosophically. “Patience is one of the hardest things to learn, but it’s important for recovery.” Still, when it comes to certain things, there’s no time to lose. So after two seasons on the Brandeis team, Rosenbauer traded in her varsity cleats to feed a passion combining her athletic prowess, her intellectual interests, and her talent for community organizing. She began working with Grassroot Soccer (GRS), a nonproﬁ t organization dedicated to leveraging soccer’s international popularity and social inﬂ uence to galvanize kids and their communities to confront HIV/AIDS with a ﬁ gurative header.

While most of the group’s programming takes place in sub-Saharan Africa, the epicenter of the HIV/AIDS pandemic, Rosenbauer began as a volunteer KickAIDS ambassador in Massachusetts. There she worked with soccer teams and health classes in Bay State high schools to raise awareness about HIV/AIDS and the organization’s efforts, and to plan fundraisers. In January 2007, Rosenbauer organized the ﬁrst KickAIDS soccer tournament at Brandeis. More than 100 students from both the activist and athletic communities raised $1,000 for GRS programs in Africa. Later that spring, she collaborated with a fellow GRS colleague to develop the “Lose the Shoes” campaign, a 3v3 barefoot soccer tournament model that has gained national popularity. Since September 2006, “Lose the Shoes” tournaments have raised more than $100,000 at ﬁfty high schools and colleges across the country in support of GRS.

“These activities channel all my passions; when I found GRS it was about more than just playing on a team—it could be something for life,” explains Rosenbauer. Earlier this year, her proven leadership with GRS, combined with her stellar academic record, helped land her a nationally competitive $30,000 Truman scholarship to pay for graduate studies in public health. Now, as a director of the “Lose the Shoes” campaign, Rosenbauer is charged with getting American youth involved in the organization’s efforts to use the power of soccer to ﬁght HIV/AIDS in Africa. Since 2003, more than 230,000 youth have graduated from GRS programs. GRS partners with African youth organizations to train local teachers, community soccer coaches, and professional players to teach middle-school children about HIV/AIDS and its prevention while imparting important life skills to make healthy choices.

“These children are learning how to protect themselves,” says Rosenbauer. “But they are also going home, talking about it with their families, and breaking down the incredible stigma surrounding the disease in their communities.” For her senior thesis, Rosenbauer, who is majoring in Health: Science, Society, and Policy, is researching the psychological and social learning theories that support the use of sport in community development. “The programs help build the resilience of children who have to deal with things they can’t control,” says Rosenbauer. “When they have self-conﬁdence and a sense of empowerment, they make healthier decisions about their lives.” Before starting graduate school, Rosenbauer hopes to spend a year in Africa as a ﬁ eld intern for GRS writing grants, developing curricula, and evaluating programs. The biggest challenge for the organization, which is supported by the Bill and Melinda Gates Foundation and Johnson & Johnson, is building credibility, she says. “It’s so hard to measure behavior change and the true effect the programs are having on these kids,” she says. “But I’ve seen grown men cry from the impact they felt they have made. That’s pretty convincing.”

GRS and FHI Takes the Field in Tanzania