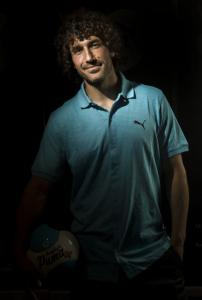 Last night, Ethan Zohn began a 550-mile journey in which he will dribble a soccer ball all the way from Gillette Stadium to Washington, D.C., to raise awareness and funds for Grassroot Soccer, a nonprofit organization he cofounded to educate children about HIV.

Since prevailing on “Survivor” six years ago, Zohn, 34, has become an advocate for HIV prevention and AIDS awareness in Africa. His goal now: to bring that message to the United States.  “We are really trying to create this generation of HIV-negative kids,” said Zohn, his mop of black curls bouncing as he talked about the program he founded with three soccer player friends.

Grassroot Soccer sends professional African soccer players into classrooms to teach middle-schoolers about HIV, using a curriculum that combines soccer and academics. “We give them all the information so they can possibly lead a healthy lifestyle. It’s getting kids to talk about these problems and reducing the stigma of HIV and AIDS. We want everyone in America to know about Grassroot Soccer.”

Zohn’s soccer roots began in Lexington, where he began playing at age 6. He enjoyed kicking the ball with his older brothers, Lenard and Lee, and with classmates. “I just loved the sport,” he said. “It transcends boundaries. It breaks down cultural stereotypes. It brings people together.”

The sport also helped him cope with the loss of his father, Aaron, who died of colon cancer when Zohn was 14.
“Soccer certainly absorbed a lot of his time and a lot of his emotion,” said Zohn’s mother, Rochelle. “Soccer has been very important to us and has helped us a lot.”

Zohn was a goalkeeper at Lexington High and continued playing at Vassar College, where he majored in biology and marine biology. After graduation in 1996, he headed to Hawaii to find work in marine biology. Instead he found the Hawaii Tsunami soccer team and played for a year. He moved back to Massachusetts and joined the Cape Cod Crusaders soccer team in 1998 and landed a spot on the revered Zimbabwe Highlanders Football Club in 2000.

There, Zohn forged a personal connection to AIDS. One of his African teammates died.

“That was my first real experience knowing and then having someone die of AIDS,” he said. “No one ever talks about HIV over there.”

After a year on the team, Zohn moved to New York City and worked as an assistant soccer coach at Fairleigh Dickinson University in New Jersey. He began to refocus his career goals.

When a full-time marketing job fell through, Zohn decided on a whim to shoot an audition tape for “Survivor,” the popular CBS reality show that places 16 contestants in an isolated setting without food, water, or shelter for 39 days. Producers cast Zohn and dispatched him to Kenya for the show’s third season. When it began airing in 2001-02, fans dubbed Zohn “the nice guy” because he didn’t backstab or manipulate to get ahead.

After winning a challenge on the show, Zohn visited the Wamba village in Zimbabwe and played hacky sack with children there. Later he learned the children were all HIV-positive.

“Here I am in the middle of this game, and I had a real-life experience which I didn’t expect to happen,” Zohn said. “That got my mind spinning. If things go my way, I want to do something good with my money and 15 minutes of fame.”

Although he did have fun splurging with some of his prize money – his brothers got cash for new cars and his mother got a vacation in New Mexico – Zohn used part of his winnings as start-up funding for Grassroot Soccer with Dr. Tommy Clark, Kirk Friedrich, and Methembe Ndlovu, who had played on Zimbabwe’s team at various times. Clark, who is a pediatrician, had conceived the idea and brought it to Zohn and the other players.

“In Africa, soccer players are heroes. They are like role models, the gods of the community,” Zohn said. “We train local professional soccer players about HIV and AIDS, and they go into the schools and teach the youths about AIDS prevention.” The program, which has graduated 250,000 children, is expanding to the Dominican Republic and Guatemala.

Zohn’s East Coast dribble-a-thon, which began last night at Gillette Stadium in Foxborough, is an extension of that work. Using back roads, he will dribble 10 to 15 miles a day, stopping at high schools and colleges to talk about HIV. He expects to arrive in Washington on Dec. 1, which is World AIDS Day.

“He has a huge heart, and he cares about everyone,” said Jenna Morasca, Zohn’s girlfriend. “He knows he’s supposed to help people, and he does. He makes his dreams happen to benefit someone other than himself.” The couple met five years ago, after Morasca won the sixth season of “Survivor.”

Zohn and Morasca live in New York now, though not together. He continues to play soccer in recreational leagues, and Morasca said he always packs a pair of cleats and a soccer ball when they travel.

Off the field, Zohn has found steady work in broadcasting as a soccer commentator. In October he’ll host “EarthTripping,” a show that highlights eco-friendly travel on the Equator HD channel. When he can, he appears on other reality shows such as “Fear Factor,” always wearing the Grassroot Soccer shirt.

“That’s how I use the celebrity and flip it back on itself,” he said, “and turn it into something positive for Grassroot Soccer and for myself.”