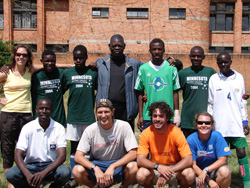 Five Zambian boys have won themselves a trip to the Brad Friedel’s Premier Soccer Academy in Ohio, USA, following their participation in the Barclays Grassroots Soccer cup held in Lusaka April 21st. The boys were selected from among 120 participants.

Zambian National Team Coach, Patrick Phiri, was part of the scouting team that held tryouts the day after the tournament. 40 talented young players were chosen based on their tournament play to tryout for a spot at the 2007 PSA camp. Coach Phiri was so impressed by these young players that he vowed to create an Under 15 National Team to help build on their talent and groom them to represent Zambia in the years to come.
The five chosen players will travel to the United States for Brad Friedel’s Premier Soccer Academy Camp from 25th to 30th June 2007 in which 150 boys selected from around the world spend 6 days in an all expenses paid summer soccer camp in Ohio, USA.

Among the boys who went to the USA last year for the 2006 Premier Soccer Academy Camp was Yoram Mwila, now a key player in the under-17 Zambian National Team and recently drafted into the U-20 Zambian National Team currently preparing for the Youth World Cup in Canada later this year.
The 2007 Soccer Camp will see the boys receiving instruction from among others Brad Friedel and top coaches from Blackburn Rovers, as well as John Barnes, star of Liverpool FC and the England National team of the late eighties and early nineties. The camp is structured after professional team training camps abroad and the US National Soccer Team experiences.
The Barclays – Grassroot Soccer Partnership is in its third year now and recently graduated another 26 teachers on 25th April from a five-day workshop where they were trained on how to teach the Grassroot Soccer HIV/AIDS prevention programme to youth throughout Lusaka. Leah Dozier, the Grassroot Soccer Zambia Director, estimates that each instructor can teach at least 30 students per term and up to 100 per year, meaning the newly trained teachers will therefore graduate nearly 2,600 boys and girls within the next year.