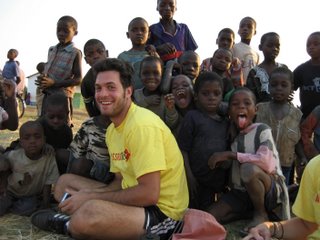 Later this month, GRS will hold its second graduation at the Mayukwayukwa Refugee Camp in the western province of Zambia. GRS has been working closely with the International Organization of Migration to educate Angolan refugees.
Over the past year, we have trained a number of refugees to become GRS trainers who run the GRS curriculum with the youths in the camp. GRS also teamed up with local NGO Breakthrough Sports Academy, which trains soccer coaches and develops league infrastructures. Together, GRS and BSA have statred Ligue Yathu, a sixteen club soccer league that includes U-12, U-14, U-17 and over 17 boys’ teams as well as a U-17 girls. Where once there was nothing, now kids have a chance to play the game they love. The soccer league and the GRS HIV education go hand in hand as the teams train and learn right on the pitch.
While Grassroot Soccer was able to donate soccer jerseys to the original group of teams. the league has grown tremendously in the past few months. The refugees from a separate camp called Nangweshi have since been resettled in Mayukwayukwa. Through a generous donation made by Minnesota Youth Soccer, we were able to give every girl’s team in the camp there own set of jerseys. Now these 16 teams have the opportunity to play in Ligue Yathu and look professional.
At the end of March, GRS is going back up to the camp to hold a festival day to celebrate all the hard work our coaches have been doing there. Along with a graduation of over 300 new HIV and AIDS prevention experts, there will also be a Ligue Yathu All-star game and award ceremony.